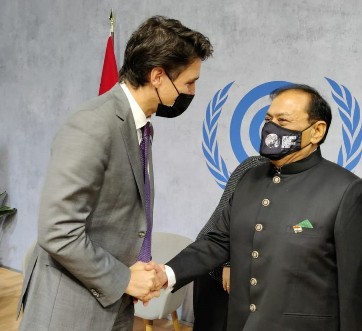 Dalmia Cement (Bharat) Limited, a leading Indian cement major and a subsidiary of Dalmia Bharat Limited, has urged global corporations to prudently incorporate green solutions and work with respective governments to bring down their carbon footprint even as they strive to meet growth compulsions.

Speaking at the high-level panel discussion, co-hosted by the Canadian Prime Minister, Justin Trudeau at COP26 in Glasgow, Scotland, on ‘the subject of “A Price on Carbon Pollution to Achieve Net Zero,” Carbon Pricing Champion and Climate Defender, Mahendra Singhi, Managing Director & CEO, Dalmia Cement (Bharat) Ltd, outlined the real possibility of forward-looking companies creating a roadmap for carbon pricing on their own, yet remaining profitable and vital to economies.

“By partnering with the government and incorporating green solutions, organisations, especially in developing countries such as India, can definitely bring down their carbon footprint. In fact, I agree with Canadian Prime Minister, Justin Trudeau that we should target a carbon pricing to cover 60 per cent of global emissions by 2030 if we want to reduce emissions and meet sustainability goals.”

He emphasized that forward-looking companies could bring down their carbon footprint and become more profitable and economical by including internal carbon pricing mechanisms while averting the long-term business risk from climate change.

Citing the green success of Dalmia Cement in the past decade or so, he said, “In the last 10 years, we were able to reduce our carbon footprint by 22 per cent yet grow three times and double our profitability by following through with our philosophy of – Clean and Green is profitable and sustainable. Today, Dalmia Cement has one of the lowest carbon footprints globally and we are committed to becoming carbon negative by 2040.”

Commenting on Carbon Pricing to Achieve Net Zero, Canadian Prime Minister, Justin Trudeau added, “Putting a price on pollution is the most efficient way to lower emissions. It is the best way to send clear predictable signals to private sectors for the investments they need to make and when it is done right, can not only reassure citizens that we are doing what we need to on fighting climate change, it can actually ensure life remains affordable for them.”