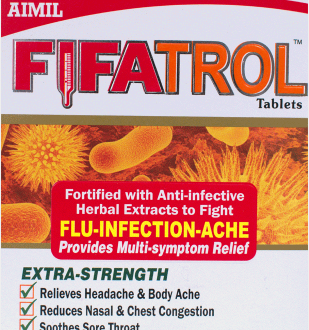 Amid rise in dengue, influenza and viral fever cases in different parts of Covid-battered India, Ayurveda experts claim that herbal drugs like Fifatrol can help boost immunity and hasten recovery from these diseases which can be fatal at times.

Professor K N Dwivedi of Banaras Hindu University (BHU) who has been recommending the herbal drug to dengue and viral flu infected patients for quite long time, said that in Ayurveda, there are some herbs and concoctions which can prevent the progression of infections due to seasonal flu and vectors such as mosquitoes and eliminate them gradually.

Developed by New Delhi-based AIMIL Pharmaceuticals (I) Ltd. – the company famous for its most popular ayurvedic preparations BGR-34 (for diabetes), Neeri KFT (for kidney ailment) and Lukoshin (for leucoderma) -, the herbal drug is being recommended by Ayurveda experts for even dengue and viral flu patients and it is very effective.

Professor Dwivedi explained that there are four types of dengue — serotypes one to four — at play, and the prevalence of serotype-two, which is more severe than other types, has been growing very fast across states.

In serotype-two dengue infection, platelet count drops rapidly, and the body’s immune response becomes hyper active leading to a cytokine storm that can damage the organs. This variant of dengue also impacts the kidneys, he said.

Earlier, the researchers at AIIMS-Bhopal, in their preliminary results have found that the drug can be a suitable alternative to allopathic antibiotics without causing side-effects. During a trial on dengue patients at AIIMS-Bhopal, Fifatrol was found to have increased blood platelet count significantly.

Fifatrol has also been mentioned in nearly 200 technologies and research activities evaluated by experts in a compendium for combating coronavirus as compiled by the National Research Development Corporation.

The ‘Compendium of Indian Technologies for Combating Covid-19 (Tracing, Testing & Treatment)’ provides the status of 200 indigenously developed technologies and ongoing research activities and efforts taken by the government to combat the deadly viral infection.

“Fifatrol acts as an immunity enhancer which is a multi-drug combination of Ayurvedic classical medicines and herbs. Researchers have suggested that Fifatrol acts as a natural antibiotic and fights infection, flu and ache,” it stated.

According to World Health Organisation estimates, one in every five people worldwide can become infected with viral fever and vector-borne disease during the peak of the season in a year.