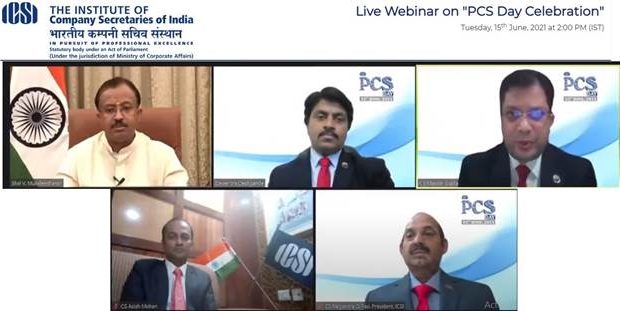 The Institute of Company Secretaries of India (ICSI) celebrated the 33rd ‘PCS Day’ today, to commemorate 15 June, 1988, a historic day when the Company Secretaries in practice were accorded recognition for certifying the annual returns under the erstwhile Companies Act, 1956.

June 15, 1988 became the first milestone in the development of the practising side of the profession of Company Secretaries in India.

To commemorate the occasion this year, the Institute organised a webinar on a theme relevant to the present times “Sustaining the Challenging Times: Passion, Innovation & Technology”. Union Minister of State for External Affairs & Parliamentary Affairs V Muraleedharan graced the occasion as the chief guest.

Appreciating the preparedness and potentiality of the Practising Company Secretaries, the Minister said, “PCS has been in existence for over thirty years; this in itself speaks volumes of their resilience and significance to the stakeholders. Company Secretaries have proven their niche in every dimension of legal corridors today, be in Companies Act 2013, SEBI Laws, Arbitration or Insolvency and hence the regulators have shown full faith in the profession.”

“The theme chosen for the day is very apt in the current times, since it is innovation and technology that will drive the 21st century,” Muraleedharan added.

The webinar brought to the fore the profound role of Company Secretaries at every step of the recovery process of the economy, from the unparalleled crisis brought in by Covid-19 pandemic through a series of focused Panel Discussions on: “CSR: Impact Assessment”,  “Exploring New Opportunities: Valuation, Arbitration, Labour Laws” and “Inspiring to Succeed: Experience, Knowledge, Traits”.

As part of the celebration, ICSI felicitated 10 senior most practising Company Secretaries for their immense contribution to the growth and recognition of the profession.

Humbled with the responsibility and faith bestowed on to the governance professionals, ICSI President Nagendra D Rao thanked the Regulatory Authorities and said that “the acclaim has redefined the role of Practising Company Secretaries and has elevated their unwavering commitment in developing a strong and sustainable India Inc.” He also thanked SEBI for recognising PCS to conduct Due Diligence under the SEBI delisting Regulations 2021 under Regulation 10 & 21.