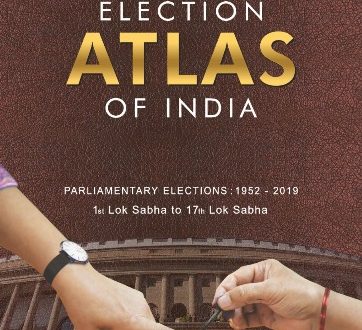 Indiastat releases its latest edition of ‘Election Atlas of India’

Indiastat on Monday released a book titled “Election Atlas of India” which presents year-wise comprehensive details on all Parliamentary elections from 1952 to 2019. It includes data updated till January 2022.

Edited and published by Indiastat Co-Founder & Director R K Thukral, “Election Atlas of India” is a systematic and chronological presentation of information about Indian Parliamentary Elections. It has also highlighted historical data about by-elections and alterations in constituencies following the delimitations and States’ reorganisation.  Moreover, the Atlas has used historic photo collages, synopses, thematic maps and statistical diagrams for better visualisation and understanding of its readers.

“The success of our first edition of the Election Atlas of India and the robust response from readers prompted us to produce an updated version after the General Elections in 2019. Significantly, at 912 million in the 2019 General Elections, India’s electorate is larger than the combined populations of the US and Western Europe. Given the fast-evolving dynamics of the General Elections during the past decade, the latest edition of the Election Atlas of India will be an indispensable and scholarly compendium about the journey of Indian Parliamentary Elections,” said Thukral.

Being a rich source of information, the Atlas will serve as a ready reckoner for academicians, researchers, students, advocates of democracy and election functionaries.

A copy of the book was also presented to the Chief Election Commissioner of India by Thukral.