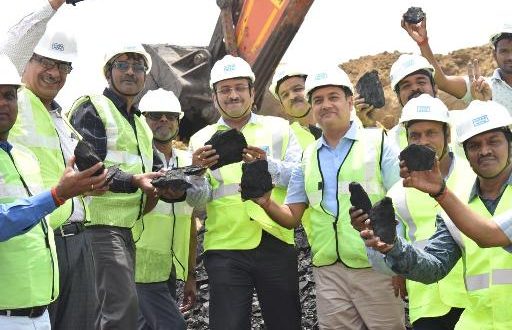 Chatti-Bariatu Coal Mining Project of NTPC Ltd which had commenced its mining operations on April 25, 2022, achieved yet another milestone on Saturday by touching the coal seam after excavation to a depth of 7 meters approximately. With this excavation of Box-Cut has also commenced, which will pave the way to start coal production from July ’22. Chatti-Bariatu shall soon join Pakri Barwadih, Dulanga and Talaipalli in the ever-expanding list of coal producing mines of NTPC.

NTPC Regional Executive Director (Coal Mining) Partha Mazumder was present during the excavation work to motivate Team NTPC. He congratulated the teams of NTPC and Rithwik-AMR and thanked the District and State administration, all villagers and village leaders and NTPC senior management on this achievement.

Mazumder also reviewed the progress of ongoing activities at the site and visited the Coal Evacuation corridor to ascertain the preparation for coal transportation from the Mine.

At its peak Chatti-Bariatu, Coal Mining Project shall produce 7 million tonnes (MT) of coal annually and supply the coal to Barh STPP (Stage-II) of NTPC. With the commencement of coal production from the Chatti-Bariatu Coal Mining Project, it will further add to the production of coal from NTPC’s Coal Mines which have produced 14 MT of coal in FY 2021-22 as compared to 11 MT produced during FY 2020-21 registering a year-on-year growth of 27 percent.