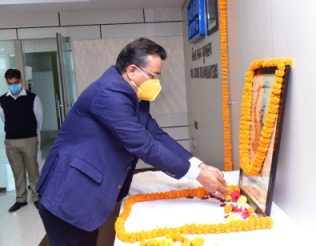 Every year this day is celebrated as Birsa Munda Jayanti to mark the birth anniversary of iconic tribal leader Birsa Munda, who led a rebellion against the British.

The august gathering of employees remembered Bhagwan Birsa Munda’s contribution and his important role in the struggle for India’s Independence on this special day.

Birsa Munda, the young freedom fighter and a tribal leader, was born on 15th November, 1875. Birsa belonged to the Munda tribe in the Chhotanagpur Plateau area. He spearheaded a tribal religious millenarian movement ‘Birsait’ that arose in the Bengal Presidency (now Jharkhand) in the late 19th century, during the British Raj, thereby making him an important figure in the history of the Indian independence movement. On March 3, 1900, Birsa Munda was arrested by the British police while he was sleeping with his tribal guerilla army at Jamkopai forest in Chakradharpur. He died in Ranchi jail on June 9, 1900 at a young age of 25.