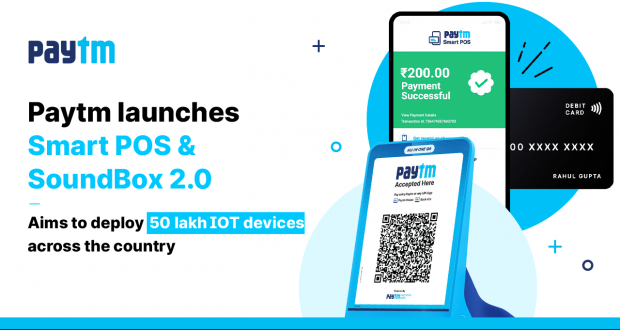 India’s leading digital financial services platform Paytm today introduced its latest Internet of Things (IoT) based payment devices, Soundbox 2.0 and Paytm Smart POS for Android phones. The company that started its journey by being the pioneer of QR-code based payment technology has expanded into IoT payment devices with Paytm All-in-One Android EDC devices, All-in-One Android Pocket POS, Soundbox among others. It has built the country’s largest network of over 2 crore merchant partners and has helped them grow their business exponentially by empowering them to accept digital payments via Wallet, UPI, Cards and net-banking. It continues to lead offline retail payments with over 9 lakh merchants benefiting from Paytm IoT devices. The company is on a mission to bring 5 crore merchants into the mainstream economy and equip businesses with 50 lakh IoT devices over the next few years.

Paytm Soundbox has played a pivotal role in establishing digital transactions as a safe & secure mode of payments, enhancing the trust of businesses and consumers to move digitally. With this IoT-based device, merchants do not need to keep checking their mobile phones for confirmation helping in increasing efficiency and reducing queues &customer waiting time on the shop floor. Instant voice-based confirmations of payments help merchants keep track of all transactions protecting them from getting duped by customers showing fake screens and false confirmations. Small merchants with feature phones, do not need to depend upon SMS confirmations. It has also enabled smooth & seamless digital payments for home delivery as the delivery executive can get instant voice confirmation after a QR-code based payment is made using the device.

The positive impact on the lives of small merchants and hawkers was clearly visible during a recent interaction of Prime Minister Narendra Modi with a woman fruit-seller Preeti. When asked about the device placed on her cart, she confidently displayed the Paytm All-in-One Soundbox explaining how it helped her to accept digital payments and get confirmation instantly. She said, “Achaa haina? Saamne Waala Paagal Nahi banaa Sakta”. (“It’s good no? No one can make a fool of me”).

With its success, Paytm has now introduced an all-new Soundbox 2.0, a ‘Made in India’ advanced IoT device that is powered by Paytm’s All-in-One payments & reconciliation technology. This new device comes equipped with a digitally enabled screen that gives instant visual confirmation of the paid amount along with the voice-based response. Merchants can also tap the ‘function button’ twice to fetch the payment summary for the entire day. This device is beneficial for merchants starting from street hawkers, medium to large retailers as it helps them in maintaining records of all transactions and streamlines all payments made during the day.

Paytm Soundbox 2.0 smart device also empowers merchants to record the net amount corresponding to the merchant’s collection along with voice-based confirmation. For example, the device during the closing hour would play the following message, “Today’s summary for Paytm QR code: Received 10 payments of Rs 100, done 3 refunds of Rs 20, Net amount to be settled is equal to Rs 80.” It also announces when the device has a full battery life of running out of charge. The device comes equipped with a 2000 mAh battery, has a SIM card slot and can be operated without a wifi connection.

While it is available in five languages including English, Hindi, Tamil, Telegu and Kannada, the company plans to add more regional languages including Marathi over the next few months. It comes equipped with Paytm All-in-QR, which enables merchants to accept unlimited payments at zero percent fees directly into their bank account. There are several easy payment plans which the merchant can choose from to acquire a Soundbox. Also, as it is battery operated that helps street hawkers with no stable power source to accept digital payments on the go. By incorporating technological advancements the company has brought in the next wave of digital payments in IoT devices.

After enabling digital payments with QR-code technology and democratising financial services in the country with a host of services, the company has now launched yet another technological milestone, the Paytm Smart POS for Android phones. This application transforms a smartphone into a device that accepts debit & credit card payments just like a normal EDC machine. Supported by the Paytm for Business app, the one application to manage all business, the Smart POS enables merchants to seamlessly start accepting contactless card payments anytime, anywhere. The company has partnered with leading financial services institutions including Visa & MasterCard for facilitating card payments for Smart POS. It would soon be live with Rupay as well.

Merchants simply need to sign up on the Paytm for Business App, after which they will be required to download the ‘Paytm Smart POS’ on their Android-based mobile phones. Once downloaded, merchants can start collecting payments from their customers by tapping the card on the back of their smartphones. The payment is then successfully collected and transferred to the merchant’s account along with the other QR payments. This provides the businesses with a single-point easy reconciliation.

Extensively used by over 1 crore merchants, the Paytm For Business app is the one application to manage all business needs, view all their transactions in one place, order Paytm QR merchandise and also transfer payments instantly to their bank accounts at any time. They can also avail multiple business services & financial solutions such as loans, insurance, among other services.

Vijay Shekhar Sharma, Founder & CEO of Paytm said, “Paytm is committed to bringing new-age financial technologies and services to 5 crore small and micro-merchants in India. Today’s launch of Soundbox 2.0 and Smart POS for Android phones expands opportunities for small businesses to experience these latest technologies at the most affordable price. Our in-store payment offerings including the pioneering All-in-One QR are examples of the best Made in India technology.”

TR Ramachandran, Group Country Manager, India and South Asia, Visa said, “Contactless payments or tapping to pay with a contactless card or mobile device, have fast emerged as the preferred way to pay globally with nearly 60 percent of Visa transactions outside of the U.S. occurring with a tap. Paytm’s foray into the contactless card payment ecosystem will truly help propel the adoption and usage of contactless cards across India. As a pioneer of the Tap to Phone solution with EMVCo, at Visa we are particularly excited about Paytm Smart PoS’s ability to offer a seamless, convenient and interoperable solution for merchants that will help them accept payments securely from millions of contactless cards in the market”

Dilip Asbe, MD and CEO of the National Payments Corporation of India (NPCI) said, “Paytm has played a vital role in the country’s payments revolution & has initiated the digital journey of millions of Indians. To give an example, a few days back for my local purchases, I was paying by scanning Paytm interoperable QR code using BHIM UPI. After the successful transaction, as a normal practice I asked the shop owner whether she received the payment. At the same instant, I heard “50 rupees received” and she smiled and said ‘Aunty ne bola – Aa Gaya’. I believe, this kind of frugal innovations truly connects Indian small merchants with digital payments and aids tremendously to create trust. NPCI strongly believes that our dream of enabling a billion transactions a day can only be achieved if all of us come together to help the ecosystem grow.”

Paytm recently announced that it has achieved over 1.2 billion monthly transactions led by the massive growth in offline payments and financial services. It has the highest market share in offline payments with 15% M-o-M growth. Close to 50 percent of its merchant partners hold a Paytm Payments Bank account and benefit from its new-age digital banking services.  With this achievement, the platform has consolidated its leadership position as the largest digital enabler promoting all payment methods including Wallet, UPI, cards and net-banking. It has been the main driving force behind encouraging digital payment adoption in villages and has trained lakhs of merchants helping in the proliferation of online transactions. Through these initiatives, the company continues to be one of the key contributors of Atmanirbhar Digital Bharat. It has successfully led the digital journey of millions of Indians and guided them through the process of making online transactions to availing all banking financial services on the app.