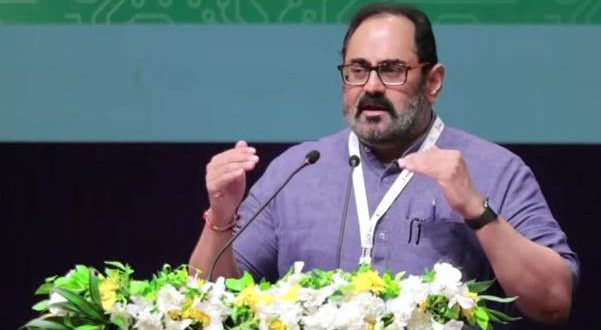 Startups and unicorns are the new drivers of India’s digital economy: Rajeev Chandrasekhar

Union Minister of State for Electronics & IT, Rajeev Chandrasekhar today said that the Government’s Digital India initiatives have brought in a seismic transformation in the economic landscape of the country, by creating more opportunities and putting the youth in the driver’s seat of the Indian digital economy.

“Saare Jahaan se Aachaa, Digital India Hamara. The world too has now come to realise India’s entrepreneurial power and many countries have evinced interest for collaborations with our home-grown startups and unicorns,” he said while addressing the Plenary session of the StartUps Conference at Mahatma Mandir, Gandhinagar, where the Digital India Week celebrations were kickstarted yesterday.

Referring to his recent UK visit, Chandrasekhar said he had met UK Prime Minister Boris Johnson and several other Ministers of his cabinet, along with a delegation of Indian 50 startups and unicorns and discussed avenues for collaborations and partnerships.

“Our success and capabilities range from the India Stack, UPI, Internet Consumer Tech, Electronics and Semiconductors, Web 3.0, Industry 4.0, AI, and High Performance Computing. These capabilities of leadership and entrepreneurship are increasingly defining New India,” he said.

Modi also visited the Digital Mela that showcased over 200 stalls on digital solutions and emerging technologies. Around 1,500 beneficiaries of Digital India initiatives from across the country participated in the event. Some of the beneficiaries got the opportunity to interact and share their experiences with the Prime Minister.

Minister of Electronics & IT Ashwini Vaishnaw and several other dignitaries were present at the event.