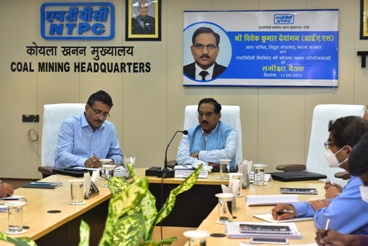 Regional Executive Director (Coal Mining) Partha Mazumder welcomed Dewangan and made a presentation on the activities of the coal mining.

During his address, Dewangan highlighted the issue of shortage of coal availability prevailing at thermal power stations across the country due to unprecedented increase in power demand because of the surge in economic activities in our country.

Though he appreciated that NTPC has surpassed coal production with respect to pro-rata target in this FY21-22, he said that coal production needs to be enhanced from NTPC’s three operational mines — Pakri-Barwadih, Dulanga and Talaipali. He also stressed for early operationalisation of the developing coal mines, while assuring to take up the critical issues of NTPC mines with the respective State Governments.

During his introductory address, Mazumder thanked the Additional Secretary and Ministry of Power team for continuous support and guidance from the Ministry which helped in resolving long pending issues of coal mining projects and also for ensuring uninterrupted coal production in mines and supply to its power stations.

Head of Coal Mining Projects attended this review through VC. Departmental heads of CMHQ and representatives from the MDOs of operating mines were also present.

The review meeting was concluded with a vote of thanks by General Manager (HR), CMHQ, Alois Topno.