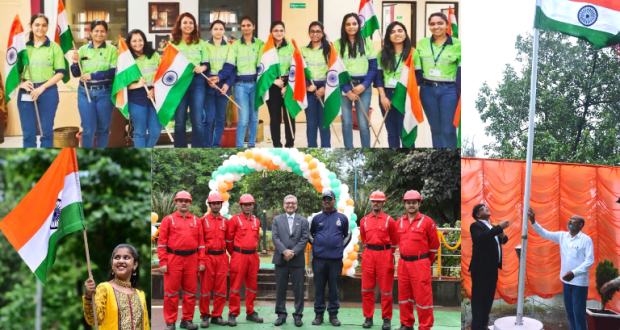 On India’s 76th Independence Day on Monday, Vedanta Aluminium, India’s largest producer of aluminium, commits to proudly upholding the principles of ‘paanchpran’, as employees, business partners, community members and their families join in the Azadi Ka Amrit Mahotsav festivities at its operations in Odisha and Chhattisgarh.

Since inception, Vedanta Aluminium has been a champion of national growth and development, putting India on the world map as a fast-emerging manufacturing powerhouse of aluminium and its products. The forthcoming decades will see aluminium become the most-consumed metal in the world, given its indispensability in a low-carbon future. As India’s largest producer of aluminium, Vedanta Aluminium plays a critical role in sustaining the lifeblood of critical industries like automobile, construction, electrical, consumer goods and packaging, sunrise sectors such as electric vehicles and solar/renewable energy, as well as high-tech sectors such as aerospace and aviation. The Company’s staying true to its commitment to the ‘paanchpran’ is elucidated by the Prime Minister of India in his Independence Day address to the nation.

National development: The Indian aluminium industry together contributes up to 2% of India’s manufacturing GDP, creating more than 10 lakh jobs across the value chain and fostering over 4000 SMEs. Vedanta Aluminium alone produces over 50% of India’s aluminium with a diverse array of top-quality products, including low carbon aluminium branded ‘Restora’, that are sought-after in India and globally.

Freedom from servitude: Establishing new benchmarks in swadeshi manufacturing for the global market, Vedanta Aluminium exports premium grade ‘Made in India’ aluminium products to over 35 countries worldwide. Indigenous development of high-end aluminium alloys helps curb imports, while investments in deep R&D and innovation capabilities builds a skilled domestic workforce, enabling the company to cater to India’s growing needs. Fundamentals such as these boost the Vedanta Aluminium family’s sense of pride in their national identity.

Pride in heritage & legacy: Beyond aluminium, Vedanta Aluminium is working to preserve and promote ancient tribal arts, such as Dhokra, Saura and mural paintings, and sports like archery, which have been a part of India’s rich traditions for eons.

Strength in unity: The company’s mammoth aluminium operations are run by one of the most diverse workforces, in terms of education, experience and geography, making it a vibrant crucible of ideas and perspectives. This unity of diverse thought processes has enabled the company to be a strong contributor in India’s growth journey.

Sharing his thoughts on Vedanta Aluminium’s role in shaping India’s Amrit Kaal,Vedanta Aluminium CEO Rahul Sharmasaid: “At Vedanta Aluminium, we are on a relentless mission to deliver sustained growth for our country, communities and customers. It is a matter of great pride for us to catalyse India’s growth story through our aluminium, which finds extensive usage in key growth sectors. Our plants are assets of national importance that connect remote and underserved regions to the socio-economic mainstream. India’s journey through the Amrit Kaal will also see Vedanta Aluminium ramp up its production and develop new products and alloys to cater to the future needs of a confident and aatmanirbhar Bharat asserting its place on the global stage.”

The Business units of Vedanta Aluminium joined the Nation in celebrating the 76th Independence day of our country on Monday.

In Bhubaneswar, Vedanta Aluminium partnered with the Swami Sivananda Centenary School to distribute flags to 600 students in support of the ‘Har Ghar Tiranga’ campaign.

At Jharsuguda, where the company operates one of the world’s largest aluminium smelters, celebrations were organised at 14 Nand Ghars, which are anganwadis modernised by Vedanta to become centres of woman and child development. Young pupils performed at cultural programs and participated in a flag hoisting ceremony. Self Help Groups (SHGs) supported by the company also contributed by stitching and distributing over 4000 national flags to community members.

In Lanjigarh, Odisha, flag hoisting ceremonies were organized at the Vedanta Hospital and the Vedanta Sakhi project office, two initiatives that are actively driving access to quality healthcare and sustainable livelihood opportunities respectively within the region.

At Lakshmipur in Rayagada district of Odisha, a football tournament was organised for local youth, while sweets and flags were distributed in Jamkhani (Sundargarh district) to 650 students.

At BALCO in Chhattisgarh, India’s celebrated and iconic producer of aluminium in Chhattisgarh, the teams presented tableaus themed on Independence Day at the company township. A flag hoisting ceremony was also organised at the plant location, while flags were distributed to all employees and family members.