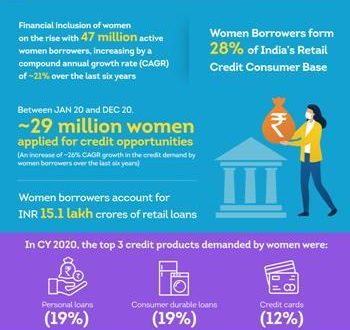 Male borrowers have increased at a CAGR of 16 per cent during the same period.

In terms of sanctioned loan amount, women borrowers account for Rs 15.1 lakh crore of retail loans, which has also grown at 12 per cent CAGR over the last six years.

Improved access to economic opportunities has catalyzed financial inclusion of women, the credit information company said in its insight report.

Speaking on the findings, the Chief Operating Officer of TransUnion CIBIL, Harshala Chandorkar, said: “Increased participation of women in the labour force, coupled with progressive government initiatives and policies on improving access to economic opportunities for women, has driven the growth of women borrowers in India’s retail credit market.”

“Factors like lower stamp duty for women consumers on home purchase in some states along with lenders offering better terms and conditions and lower rate of interest for women borrowers, have further catalyzed this growth. Also the fact that women have a higher average CIBIL score than that of men indicates that women have a better credit history”

Insights on credit demand show that more than 29 million women applied for credit opportunities in CY 2020 (January-20 to December-20) indicating an increase of 26 per cent CAGR growth in the credit demand by women borrowers over the last six years. Further insights based on product type show that there is a marked preference in demand for personal loans and consumer-durable loans by women borrowers, with 38 per cent of enquiries by women coming for these two loan products.

Insights from CY 2020 show that within three months of checking their CIBIL score and report, 22 per cent of self-monitoring women consumers opened at-least one loan account or credit card.

Women consumers also show better credit history as compared to men, with the average CIBIL Score of an Indian woman consumer being 719 – higher than that of an average male consumer at 709.