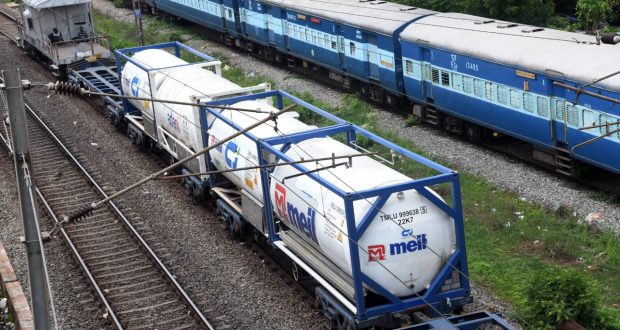 In a move to provide Liquid Medical Oxygen (LMO) during the Covid-19 pandemic period to different States those having insufficient Oxygen, Indian Railways is running Oxygen Express Special Trains to and from different parts of the country.

During this COVID-19 upsurge, East Coast Railway (ECoR) has taken up the lead role in transporting LMO in a major way for saving lives of patients. Till today, ECoR has carried 2600.02 tonnes of LMO from different Steel Plants under its jurisdiction towards different States.

The first rake of loaded LMO by Indian Railways was sent from Rashtriya Ispat Nigam Limited, Visakhapatnam to Nagpur and Nasik. As many as 40 Oxygen Express Special Trains loaded with LMO in 162 containers were sent from ECoR jurisdiction towards different States of the country. Loaded LMO rakes form Durgapur, Tatanagar and Rourkela going towards Secunderabad, Chennai and Bangalore have also been passing through ECoR jurisdiction with top priority.

Almost half of the 40 Oxygen Express special trains from ECoR jurisdiction were received by Delhi and Haryana areas. About 1010.09 tonnes of LMO through 63 containers in 19 Oxygen Express Trains were transported to Delhi and Haryana. Oxygen Express Trains from ECoR jurisdiction were also been sent to Maharashtra, Telengana, Kerala, Tamil Nadu and Karnataka. ECoR has carried 545.31 tonnes of LMO to Maharashtra, 117.9 tonnes to Kerala, 685.7 tonnes to Telengana, 120 tonnes to Tamil Nadu and 120.98 tonnes to Karnataka.

Steel Plants like Tata Steel BSL and Jindal Steel & Power Limited (JSPL) at Angul and Tata Steel Limited at Kalinga Nagar have contributed majorly in Oxygen loading from ECoR jurisdiction. Till now, 33 Oxygen Express Trains loaded with LMO, have been sent from Angul area, 6 from Kalinga Nagar area and 1 from Visakhapatnam area towards various States from ECoR jurisdiction for saving life of patients affected in Covid-19 infection.

East Coast Railway has taken all precautions for safe running of Oxygen Express Special Trains from its jurisdiction and sending these trains at the earliest. Apart from this, Oxygen Special Trains from other Steel Plants beyond ECoR jurisdiction have also been given priority as in “Green Corridor” for safe running and early movement to their destinations.

Meanwhile, a total of 1374 tankers/containers carrying 25282.943 MT medical oxygen have been dispatched under escort/supervision of Odisha Police so far from Rourkela, Jajpur, Dhenkanal and Angul districts of Odisha to 16 States/UTs in the country.

A Special Cell is coordinating the loading and transportation of medical oxygen by Odisha to States facing deficit. A dedicated corridor has been set up with round the clock monitoring. District SsP/DCsP and Range DIG/IG/CP are supervising the movement personally within their jurisdictions, ECoR said in a statement today.