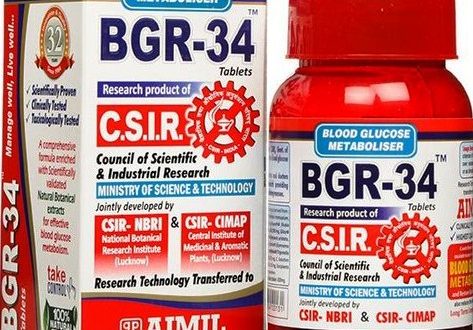 BGR-34 can be effective in managing post-Covid hyperglycemia

People who have survived Covid-19 but are now battling with hyperglycemia — a condition in which blood sugar level shoots up fast — can find some relief in ayurvedic formulations like BGR-34 which are based on natural bioactive compounds with dipeptidyl-peptidase-4 (DPP-4) inhibitory effects to manage blood glucose levels.

According to a global analysis published in the journal Diabetes, Obesity and Metabolism, at least 14.4 per cent of hospitalised patients reported onset of diabetes, causing dysfunctioning of glucose metabolism resulting into hyperglycaemia after recovery.

Though a number of drugs are available to control hyperglycemia, DPP-4 inhibitors have been found to be the safest against post-Covid high blood sugar, according to a recent study in Elsevier journal.

In fact, as per a research published in the Journal of Drug Research, the primary source of DPP-4 inhibitor is the herbal plant Daruharidra.

Dr. AKS Rawat, scientist from National Botanical Research Institute (NBRI), Lucknow, which has developed the ayurvedic drug, said “Because of this property, the Daruharidra was added in the herbal formulation BGR-34.”

Scientists researched intensively to study its efficacy, he said.

Apart from Daruharidra, BGR-34 has two other herbal elements that can keep hyperlgycemia in check. One is Gymnemic acid, sourced from Gudmaar medicinal plant which, according to ChemRxiv journal, controls such conditions in diabetic patients.

Similarly, another chemical element, Trigonoside IB that is found in fenugreek, also helps in controlling hyperglycemia, as has been detailed in the journal, Environmental Challenges. BGR-34, among other herbal ingredients, also contains bioactive compounds of both these medicinal plants.

Giloy, Vijaysaar and Majeeth, all known for their anti-diabetic properties are are present in BGR-34.

Dr Rawat said these studies are proof that the herbal formulation is also effective in treatment of post-Covid new onset diabetes given that these plants produce different kinds of bioactive compounds.

While nearly one in six people with diabetes in the world being from India which is reeling under Covid-19, cases of hyperglycemia caused by damage of the pancreatic beta cells, leading to insufficient insulin production, is on the rise.

Apart from promoting healthy functioning of the pancreas, it regulates glucose homeostasis, helps in maintaining normal blood glucose level and reducing the level of glycosylated Hb, nourishes and tones vital organs and protects from oxidative damage, and boosts the immune system.