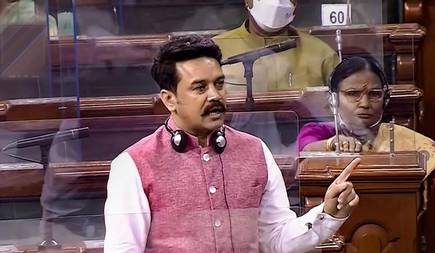 The Government has been contemplating on infusing more investments prioritising growth of infra and health sectors to streamline the economy. This was stated by Union Minister of State for Finance & Corporate Affairs Anurag Singh Thakur in a written reply to a question in Lok Sabha today.

The Minister stated that to encourage investments in infrastructure including health sector, the following measures have been announced by the Government recently:

Amendments in the Securities Contract (Regulation) Act, 1992 along with consequential amendments in the Securitization and Reconstruction of Financial Assets and Enforcement of Security Interest Act, 2002 and the Recovery of Debts and Bankruptcy Act, 1993, to enable debt financing of Infrastructure Investment Trusts (InvITs) and Real Estate Investment Trusts (REITs) by Foreign Portfolio Investors included in the Finance bill 2021.

Amendments to Section 2 (48) of the Income Tax Act to enable Infrastructure Debt Funds to issue Zero Coupon Bonds included in the Finance bill 2021.

In the Budget 2020-21, 100 per cent tax exemptions, subject to certain conditions, were granted to foreign Sovereign Wealth Funds (SWF) and Pension Funds on their income from investment in Indian infrastructure. The benefit has extended to SWFs and Pension Funds investing in a Non-Banking Financial Company registered as an Infrastructure Finance Company (NBFC-IFC), or in a Non-Banking Financial Company registered as an Infrastructure Debt Fund (NBFC-IDF) or in a domestic company having not less than 75 per cent investment in a company carrying on the business of developing, or operating and maintaining any infrastructure facility, and also in a Category I or Category II Alternative Investment Funds (AIF) which has invested in an Infrastructure Investment Trust (InvIT), subject to certain conditions included in Finance bill 2021.

The Minister further stated that the Government, on taking a holistic approach to health sector, has allocated an amount of Rs. 2,23,846 crore for Health and Wellbeing expenditure in 2021-22 with focus on strengthening three areas viz. Preventive, Curative, and Wellbeing. Besides specific provisions for the Ministry of Health & FW and Ministry of Ayush, it also has provisions for COVID vaccination, Drinking water and Sanitation, Nutrition and Finance Commission Grants for Health and Water & Sanitation.

Giving further details, the Minister stated that the Cabinet in its meeting held on 25.11.2020, approved an equity infusion of Rs 6,000 crore in NIIF Infrastructure Debt Financing Platform, comprising of Assem Infrastructure Finance Limited (AIFL) and NIIF Infrastructure Finance Limited (NIIF-IFL). The capital infusion will help in substantially scaling up the two institutions that specialize in infrastructure financing, which can attract both debt and equity investors who are keen to be associated with infrastructure. NIIF was created in the year 2015 with the objective of attracting equity investments from both domestic and international sources for infrastructure development in commercially viable projects, both greenfield and brownfield, including stalled projects.

The Minister said that the Government follows a policy of disinvestment through Strategic Disinvestment/ Privatization (substantial sale of Government shareholding of CPSEs along with transfer of management control) and Minority stake sale for benefiting the economy in terms of transfer of new technology, growth in employment and GDP etc., the receipts from disinvestment of CPSEs are also utilized for funding of development and infrastructure projects. Since 2016, Government has ‘in principle’ approved strategic disinvestment in 35 cases.