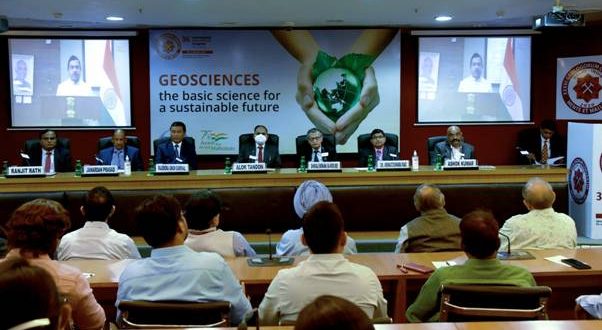 Union of Minister of Coal, Mines and Parliamentary Affairs Pralhad Joshi on Sunday said that India’s total geographical area under mining has increased substantially during the last few years and the sector is providing employment opportunities to 12 million people across the country, both directly and indirectly.

Highlighting the recent reforms undertaken in the Mining Sector that provided the right fillip to the Indian economy, Joshi praised the noteworthy strides made by the Geological Survey of India (GSI) in making use of the latest technologies for scaling greater heights in excellence. Touching upon the importance of the 36th International Geological Congress, the Minister said that the three day  event, hosted by India after 58 years, will provide the right platform for geoscientists from across the globe to formulate  more effective tools in the field of sustainable development.

The 36th International Geological Congress is based on the theme  “Geosciences: The Basic Science for a Sustainable Future”. IGC is a joint endeavour of the Ministry of Mines, Ministry of Earth Sciences, Indian National Science Academy and the Science Academies of Bangladesh, Nepal and Sri Lanka. Described as the Olympics of Geosciences, the IGCs are held quadrennial, under the aegis of the International Union of Geological Congress (IUGS), the Scientific Sponsor of the IGCs. The three -day event will witness participation of 5000-7000 delegates from all over the world.

The event would provide a unique platform for knowledge and experience sharing in the field of geosciences and professional networking. It would give first-hand information on latest technologies in mining, mineral exploration and management of water, mineral resource and environment. On the inaugural day of the IGC, commemorative Postage Stamps, First Day Cover and multi-colour coffee table books on Geo tourism hotspots were released

India, leading its regional partners, had bid in the 34th International Geological Congress at Brisbane in 2012 to host the 36th IGC in India in the year 2020. The present Congress, originally scheduled to be held during 2-8 March, 2020 was postponed due to Covid Pandemic. 58 years ago India had hosted the 22nd session of the IGC which was the first IGC on the Asian soil.