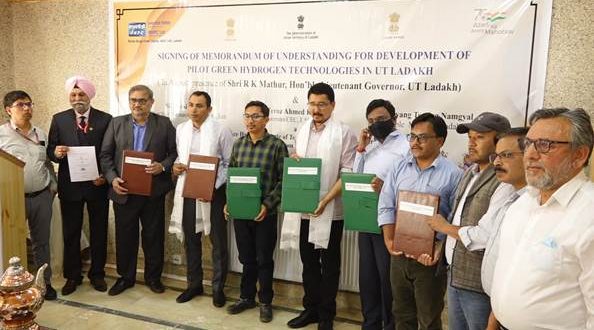 NHPC on Thursday signed two MoUs for the development of “Pilot Green Hydrogen Technologies” in line with the country’s resolve to reduce the carbon footprint in the Power Sector in Leh and Kargil districts of Union Territory of Ladakh.

The MOUs were signed in the presence of RK Mathur, Lieutenant Governor, Union Territory of Ladakh.

As per the MoU signed for Leh district, NHPC shall consider the development of Pilot Green Hydrogen fuel cell-based Microgrid including Hydrogen production to meet the power requirement of the NHPC guest house at Nimmo Bazgo Power Station (Leh) within NHPC premises. According to the MOU signed for the Kargil district, the hydrogen generated in Kargil will be used in fuel cells for mobility which will be capable to run two buses for up to 8 hours in the local area of Kargil.

NHPC shall upscale hydrogen production on a commercial scale to supply the hydrogen need of the Ladakh region in different sectors like mobility, transportation, heating, and Micro-grid & subsequent MoU shall be signed separately.

These two pilot projects will create a roadmap for future development of Green Hydrogen & subsequent reduction of carbon emission in the transportation/heating sector and will also attract long-term investment in the Hydrogen economy creating different revenue streams & job opportunities for the youth of UT of Ladakh.