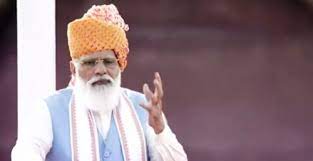 Addressing the Nation on the occasion of the 75th Independence Day today, the Prime Minister stressed on the need for energy independence and said that the plan involves India becoming a global hub for green hydrogen production and exports.

He said that among all the programmes being carried out today in the country, the one which would help India make a large leap is the area of green hydrogen.

“We have to make India a Global Hub for Green Hydrogen Production and Export in the ‘Amrit Kaal’. This will not only help India to make a new progress in the field of energy self-reliance but will also become a new inspiration for Clean Energy Transition all over the world,” the Prime Minister said, adding that the  new opportunities from Green Growth to Green Job are opening up today for our start-ups and youth.

The Prime Minister also said that India will have to pledge to become energy independent before its 100 years of Independence.

The strategy will be to leverage scale for its ambitious green hydrogen plan in line with the renewable energy programme, making India lead the world in terms of clean energy.