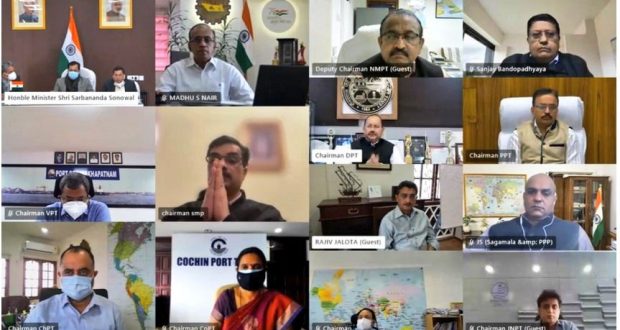 Union Minister of Ports, Shipping and Waterways Sarbanand Sonowal on Saturday said that initiatives are being implemented by Major Ports of India that include areas, such as increase share of renewable energy to more than 60% across major ports by 2030. MoPSW is also working on draft of a “Green Port Policy” document to suggest framework and guidelines for incorporation of green initiatives in the port sector.

The Minister chaired a meeting with all Major Ports, CSL and IWAI to review the progress on various green initiatives being implemented, as per Maritime India Vision (MIV) 2030, for the development of Green Ports & Green Shipping in India.

A number of initiatives have been taken in India to promote green ecosystem in maritime sector. These are in line with International Maritime Organization (IMO)’s 2030 Decarbonization strategy and 2050 Green House Gases (GHG) strategy. Initiatives are being implemented by Major Ports of India that include areas, such as increase share of renewable energy to more than 60% across major ports by 2030, setting up of solar power plants, availing of shore power supply to vessels via berths, multi-clean fuel adoption for vehicles within port ecosystem, gradual phasing out of diesel locomotives at ports, etc.

In the review meeting, the Chairmen of the Major Ports showcased their activities undertaken on Green Port Initiatives and further action plans.

Presenting Paradip Port’s status on green initiatives and future action plans, Paradip Port Trust (PPT) Chairman PL Haranadh affirmed that PPT is in line to the Ministry’s vision and is committed to reduce its carbon footprint. On increasing the usage of renewable energy, Haranadh said that some rooftop solar plants on RESCO model have been installed in Paradip and discussion is going on with the Odisha State Government for providing around 50 acres of land to set up a 10 MW solar plant. “To drive adoption of multi-clean fuels, Paradip Port is in talks with oil companies like IOCL, BPCL and GAIL to prepare a framework for setting up LNG depot at the Port and conversion of dumpers lying inside Port to LNG engine. Around 30 km of rail line electrification has been completed at Paradip Port and by 2024 the Port aims at electrifying its entire rail network. Similarly, diesel locomotives will be phased out in years to come,” informed Haranadh.

Several dust management systems have already been carried out at PPT that includes net barriers around port premises, covered conveyor belts and pipelines from nearby industries, water sprinklers and dry fog dust suppression system at berths, siding plots and MCHP.

As part of Corporate Environment Responsibility, Haranadh said that Paradip Port is committed to work for betterment of air quality by setting up ambient air quality monitoring stations at key locations. He emphasised that mechanisation is the key to reduce pollution in a dry bulk port like Paradip and nearly 80% of the present berths are mechanised whereas rest of the berths would be mechanised by 2025.

Under waste management, Paradip Port has already installed three Sewage Treatment Plants of total 6.5 MLD capacity, water from which is being used in mist cannons, water sprinkling systems and gardening. Around 50 acres of land have been provided to Paradip Municipality for solid waste management. Paradip Port has undertaken an agreement with Numaligarh Refinery Limited (NRL) for using about 2.3 million cubic meter of dredged material for land reclamation of its upcoming crude oil tank terminal at Paradip. A rain water harvesting project will be undertaken by 2025.

Haranadh informed that PPT has set an ambitious target of 1 million tree coverage by 2025.