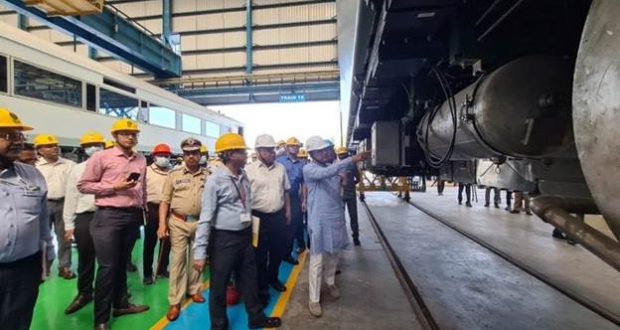 Congratulating the Integral Coach Factory (ICF) team for designing and rolling out the modern train Vande Bharat Express, Vaishnaw said it is a proud project for Indian Railways.

“All regions of India will be connected through Vande Bharat Express trains as envisaged by the Honourable Prime Minister which is a dream coming true for all of us,” Vaishnaw said.

He visited ICF and inspected the Vande Bharat express coaches under production.

Indian Railways is committed to roll out 75 Vande Bharat rakes by August 2023.

As an excellent example of the ‘Make in India’ success story, the Indian Railways launched India’s first indigenous Semi High Speed train, Vande Bharat Express, The first Vande Bharat Express train was flagged off on 15 February, 2019 on the New Delhi Kanpur-Allahabad-Varanasi route.” Speed, Safety and Service are the hallmarks of this train. Integral Coach Factory (ICF) Chennai, a Railways Production unit, has been the force behind a completely in-house design and manufacture, computer modelling and working with a large number of suppliers for system integration in just 18 months.