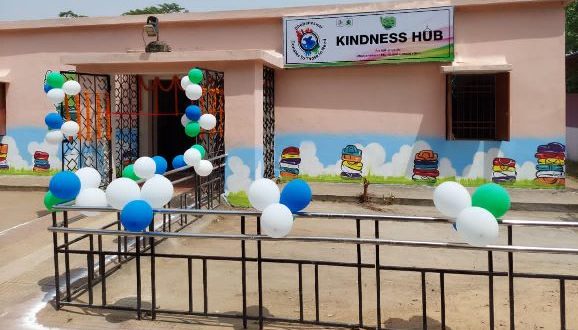 Are you discarding your old garments? Or, clothes spilling out of your wardrobe? Don’t worry. You can help somebody by donating them to the Bhubaneswar Municipal Corporation (BMC) as the civic body today launched a one-of-its-kind initiative called ‘Wheel of Kindness’ to donate clothes to the poor, needy and homeless people living in the State Capital, on the occasion of ‘Utkal Divas’.

This unique initiative was inaugurated by BMC Administrator and Director of Municipal Administration of the Odisha Government, Sangramjit Nayak in presence of BMC Commissioner, Prem Chandra Chaudhary and several other officers of the civic body.

Appreciating BMC’s initiative and terming it as one-of-its-kind in the state, Nayak said, “Like food and shelter, clothing is also a basic need of a human being. Therefore, in a civil society, we all must show kindness towards the poor and underprivileged people to ensure that everyone wears good clothes. Instead of throwing away wearable clothes, people should come forward to donate their garments which will be given to the needy. By doing so, you can bring smiles on the faces of poor people amid a difficult time we all live in these days.”

BMC Commissioner Chaudhary thanked all the officers, staff, and NGO members involved in the project to make it happen and urged them to make it successful by achieving its desired target.

“The purpose behind this initiative is to collect old clothes that can still be used and make those available to the needy free of cost. Besides, it will encourage people not to discard their wearable old clothes; instead they can give it to us so that it reach the needy and homeless people living in the city,” said Chaudhary.

Making an appeal to individuals and organisations to extend all possible help and support to this endeavor, the BMC Commissioner added: “It becomes the responsibility of the large civil society to create a caring city where all citizens live in a dignified manner.”

The civic body has selected and partnered with city-based non-profit organization Vikash, which will manage this project starting from collection of used clothes from people to distributing them among the poor, needy and underprivileged people. The NGO has been given the task of collecting at least 17, 500 pieces of clothes every month.

The BMC will spend about Rs 1.60 lakh every month as part of the running and maintenance cost of the initiative.

A bus has been designed and decorated for display and distribution of clothes at selected points of the city, especially in slum areas where there is a constant need for clothes among the underprivileged. Around 2 to 4 people will be engaged in the vehicle to collect old clothes and distribute them among the needy as per their requirement. A register will be maintained to keep the record of beneficiaries.

The BMC has set up a facility called ‘The Kindness Hub’, a central washing, packaging and inventory management centre (CWPIMC) on the premises of Old AG Colony UP School in Madhusudan Nagar. The clothes collected from the donors will be washed, sorted and packaged for distribution at CWPIMC. Around 10 people will be deployed daily to manage the entire activity starting from collection to distribution.

The Kindness Hub accepts clothes of persons of all ages — right from babies to elderly people — apart from bedsheets, towels, blankets and other such necessities.

Interested people can donate their clothes at BMC main office and zonal offices or they can give a call on mobile number +91-7978242201 to get their clothes collected from their doorsteps.

This apart, the BMC is also planning to keep drop boxes for clothes at places like shopping malls and apartments etc. in the coming days.

As of now, the bus will ply on the streets nearby different slums or labour markets across the city in two shifts – from 9 AM to 2 PM and from 4 PM to 9 PM on working days.

Each MCC has the processing capacity of up to five tonnes per day. These facilities convert wet or bio-degradable waste into compost and greatly help in addressing waste management issues in the capital city.

BMC also flagged off a fleet of 24 garbage collection vehicles which will collect the segregated waste from households and then carry it to the MCCs. These vehicles have been deployed to reduce the problem of mixed garbage collected at the garbage plant.

The Commissioner appealed to all residents of Bhubaneswar to put segregated waste in these vehicles so that the garbage can be processed easily at MCCs.

The Bhubaneswar Municipal Corporation organised ‘Bada Khana’ community lunch for sanitation workers at Bharatpur, near Badagada Crematorium and Line Kalyan Mandap under its three administration zones. The event was organised to mark the Utkal Divas. In the first-of-its-kind programme by the BMC authorities, the families of the ‘Safai Karmacharis’ were also invited to join the occasion.

“The programme has been organised to motivate and honour those who work tirelessly and passionately to keep the city clean and green. We gave them appreciation certificates to boost the morale and motivate them,” said BMC Deputy Commissioner (Sanitation) Suvendu Kumar Sahoo.