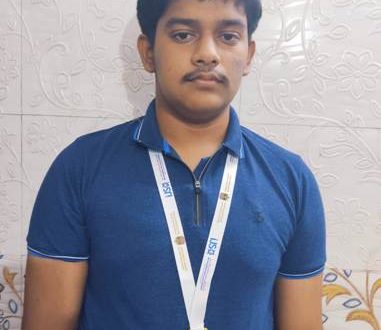 A bright young student who always dreamed of skyrocketing his Olympiad dreams, has made India proud by winning the gold medal at the 18th International Junior Science Olympiad (IJSO) held in Dubai this year. Rajdeep Mishra, a Class 10 student from Odisha, was among the six students who represented India and won the competition owing to his dedication and perseverance. Rajdeep has been studying with BYJU’S since 2020 to ace his science and mathematical skills.

Known as one of the toughest yet prestigious exams, the International Junior Science Olympiad (IJSO) is a five-staged competition for students below the age of fifteen. Chasing his dream since a young age, Rajdeep has been attempting the Olympiads conducted by the Science Olympiad Foundation every year. Aiming for gold at IJSO, Rajdeep started working on excelling in his weaker areas with the help of BYJU’S. Studying with BYJU’S app since 2020, he has been able to strengthen his problem solving, experimentation and critical thinking skills. Despite being a class 9 student, Rajdeep even covered class 10th and class 11th syllabus to level up his performance for IJSO. Due to such consistent efforts, he has earned this remarkable feat of securing top ranks in all five levels of IJSO.

Rajdeep Mishra, BYJU’S Student says, “BYJU’S enabled me to gain an advantage over my peers by providing content on advanced topics. The virtual classes cast an ever-lasting imprint making it not just easy to understand the concept but also retain it. Everyday learning sessions explained with diagrams were very informative and engaging. I used to spend two to three hours preparing for the Olympiad and BYJU’S became a constant companion in my IJSO preparation journey. I further supplemented my preparation strategy by solving question papers from 2012 onwards along with mock tests to understand the areas of improvement.”

Vinay MR, Chief Content Officer, BYJU’S, said, “It gives us immense pleasure to see Rajdeep’s achievements and success, and we are proud of how he has balanced studies and Science Olympiads. His dedication and determination to excel are very commendable. At BYJU’S, we strongly believe in providing freedom to our students and encouraging them to nurture their talents alongside. We are glad to be a part of Rajdeep’s success story. We congratulate him and wish him the best for all his future endeavours.”