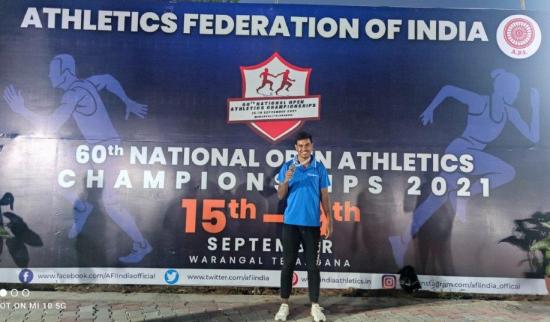 After winning the Gold Medal in the 200m with Personal Best (PB) timing of 20.75 seconds at 60th National Open Athletics Championships at the Jawaharlal Nehru Stadium, Hanamkonda in Warangal, Telangana on Sunday, sprinter Amlan Borgohain has now set his sights on the Commonwealth and Asian Games next year.

The 23-year old, who has been training at the Reliance Foundation Odisha Athletics High-Performance Centre (HPC) in Bhubaneswar since April 2020, decimated the rest of the field in a sizzling performance. Borgohain had won silver in the 100m earlier in the competition, clocking yet another PB of 10.34, but it was his standout performance in the 200m on the final day of races that has established his credentials as among the most impressive young athletes in the country.

“I expected to dominate the race,” said a confident Borgohain after his win. “My coach said you can win the race in the call room and that’s what I did with my presence and confidence. I was happy with my performance but I made a few technical errors so I know I can still run much faster. Over the last few months I have made improvements in my speed endurance and my finishing speed.  It is something me and my coach have been specifically working on for this competition.”

“Firstly, it was a significant improvement on his personal best and secondly the manner and confidence in which he really owned the race from start to finish was very impressive,” said James Hillier, Head Coach, Reliance Foundation Odisha Athletics High-Performance Centre. “It was fascinating to note that he was the only non-international in the race and the least experienced.  However, he oozed class that made it look like he was the most experienced campaigner in the field.”

Since joining the HPC 18 months ago, Borgohain’s progress has been remarkable. His PB in the 200m at the time he was recruited was 21.89 seconds. The benefits of a professionally managed program run from the Kalinga Stadium in Bhubaneswar, where athletes receive cutting edge support in areas such as nutrition, psychology, weight training, flexibility, recovery and conditioning, has worked wonders for him. His PBs have consistently improved, with Borgohain recording timings of 21.15 & 21.10 seconds in the internal Performance Graded Races at the HPC earlier this year. At Warangal, he was able to improve those timings further to 21.00 seconds in the heats and 20.75 seconds in the final.

“One of the main areas we work on is ankle stiffness, a stiffer ankle allows an athlete to be more efficient with each step they take,” explains Hillier, providing insight into the technical aspects of Borgohain’s coaching regimen. “He is certainly the best 200m runner in the country at the moment. I would like to take him to Europe next year to compete on the European circuit and get some more experience competing against quality foreign athletes.”

While Hillier believes Borgohain is a more “natural” 200m runner, he is targeting improvement in the 100m as well. The 43-year old British national, who came on board as Head Coach in 2019, when the HPC was set up as a collaborative effort between the Odisha Government and Reliance Foundation, believes his ward can run into the low 10.2 seconds or “even quicker” in the 100m. For his part, while Borgohain was pleased with the silver medal he regretted the fact that his starting blocks slipped as the gun went off, leaving him a couple of metres down at the 30m stage.

“However, I finished extremely strongly to get the silver medal and the slight disappointment of not winning knowing I could have done spurred me on for the 200m,” says Borgohain.

“If he keeps getting faster over the 100ms, it will help his 200m,” adds Hillier. “I think in the right race he can break the national record in the 100m.”