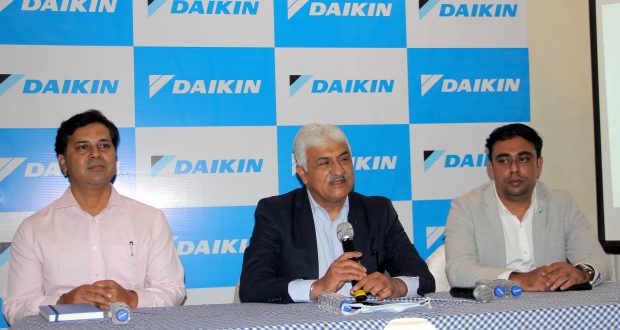 Daikin India plans to do away with imported components soon

Daikin Air-conditioning India Pvt. Ltd., a subsidiary of Daikin Industries Ltd, Japan, expects the share of imported components in its total manufacturing to come down to close to zero from current levels of around 40 per cent once its proposed third unit in Andhra Pradesh starts commercial production.

Work on the Sri City (Andhra Pradesh) unit has started and commercial production is expected to start by August-September 2023, said Virmani.

Daikin is investing close to Rs 1,000 crore on the unit in the first phase, and is looking to make Rs 1500 crore investment on the project in the second phase. The expansion, which is a part of its investment proposal under the PLI scheme for AC components, would cut imports from its own factory by 15 per cent, informed Virmani

“While the reduction in imports would help boost the company’s bottomline, it would also help grow the market as the benefit in cost reduction would be passed on to consumers, thereby leading to higher customer acquisition,” he said.

Daikin, the world’s no.1 air-conditioning company, launched a new range of split room air conditioners indigenously conceptualised and manufactured for the discerning Indian consumers. This new U-series range boasts of future ready technology that empowers the customers to manage the quality of air conditioning across their premises.

The residential AC market in India, which was estimated at 7 million units per annum in FY-20, dropped to 5.5 million units in FY-21 due to the Covid-19 pandemic.  Sales would be back to pre-pandemic levels by the end of this fiscal, hoped Virmani.

He further said that the company is likely to register over 20 per cent growth in turnover at around Rs 5,200 crore during the current fiscal, up from Rs 4,300 crore in FY21.

On Odisha market, he said, though Daikin is doing good business in big cities like Cuttack and Bhubaneswar, its penetration in smaller towns is not that impressive due to lack of awareness. And the company is now focusing on reaching the interior parts of Odisha to further the business.

At a time when the Air-Conditioning industry is challenged by the availability of technically skilled workforce, Virmani informed that Daikin is soon going to set up a ‘Center of Excellence’ in Bhubaneswar to ensure hands-on practical exposure for the students and help them acquire the new technologies being practiced in the air-conditioning industry including the VRV technology, R-32 refrigerant and inverter technology. The company is already in talk with KIIT, CTTC and CIPET for opening the Japanese Institute of Manufacturing Excellence which will offer a three-month Certificate course in air conditioning.

2022-02-09
admin
Previous: Acer launches its second Intel-powered Make in India laptop
Next: BoB commemorates 75 years of Independence with focus on digitisation of banking