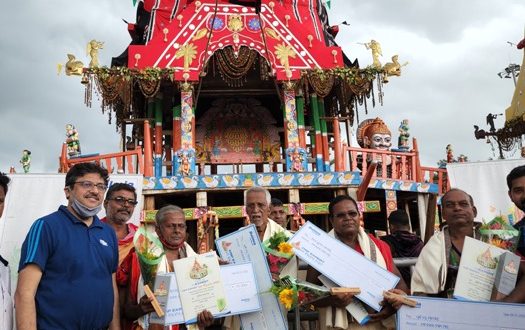 Dalmia Bharat Limited (DBL) has reiterated its commitment towards its region-building efforts in Odisha during the world-famous Rath Yatra’s 2022 edition through its ‘Saluting the Expert’ initiative aimed at the artisan community involved in the construction of the chariots of the Trinity – Lord Balabhadra, Lord Jagannath and Devi Subhadra.

Building on shared synergies that Odisha’s craftsmen have held as well as the domain expertise that its ‘Dalmia DSP – DHALAI EXPERT’ offers to the Eastern region, the company paid tribute to four noted artisans community, involved in building the chariots, that helped build the chariots with DSP Expert Ratha Shilpakar Samaan. This is a unique initiative conceptualized by the organization and initiated for the very first time in Odisha.

Bijay Kumar Mohapatra, Nrusingha Mohapatra, Krushna Chandra Moharana and Purna Chandra Mohapatra were felicitated at a special event in front of the chariots, crafted by the artisans at Puri. They were presented with a plaque, a shawl and a cash award of Rs.10,000 as a sign of respect towards the artisans’ community that designs and constructs the chariots. DBL also felicitated another 20 contractors at the event who are experts in the field of home construction and unveiled a chariot before their channel partners, influencers and customers.

Through its ‘Saluting the Expert’ initiative, DBL commends the strength and fortitude of the people of Odisha. The company also looks forward to contributing towards the region’s skill capabilities through its endeavours and community efforts and is confident that this will help ensure India’s vision of becoming self-reliant and progressive.

Dalmia Bharat Limited has participated in the Rath Yatra celebrations through its designed structures that were well received by festival visitors in the past in celebration of a resurgent Odisha.

At Rath Yatra 2022, the artisan community – responsible for upholding the great state’s unique craft traditions that contribute to Odisha’s progress and the nation’s cultural diversity – continues to sustain the globally-acclaimed Jagannath Rath Yatra and its customs through their expert craftsmanship and sincere devotion.