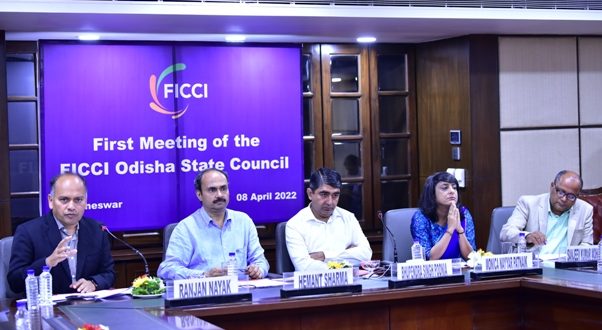 Highlighting various entrepreneurial offers Odisha offers in every sector, a senior bureaucrat of the State Government urged industry bodies to bring in enterprising spirit among youth.

Stating that the industry bodies also play a crucial role in bridging the gap between the Industry and Government, Sharma informed that the Odisha government would organize Make in Odisha with the active involvement of FICCI as the national industry partner.

Speaking on the occasion, Industries Department Additional Secretary and IPICOL Managing Director Bhupendra Singh Poonia highlighted the business opportunities for both the large and MSMEs enterprises in Odisha. Saying that IPICOL has been working for industrial development in Odisha, he assured that IPICOL would extend necessary support to Industries expanding their business in the state.

Lauding the Odisha Budget for FY23, FICCI Odisha State Council Chairman and JSW Steel COO Ranjan Nayak said Government of Odisha made a significant allocation to the mining sector. He suggested that the business models should be sustainable by adopting more green initiatives. He also spoke about resource nationalism, digitalization and geo-political factors that influence the business in recent times.

The meeting focused on mining, energy, tourism, education, skill development and MSMEs sectors in the state. An interactive session was organized for the State Council Members with the senior government officials of the State Industries department.

During the open house discussion, Industry members discussed various issues and challenges during the Covid pandemic; and put forth their views to strengthen the efforts of the government.