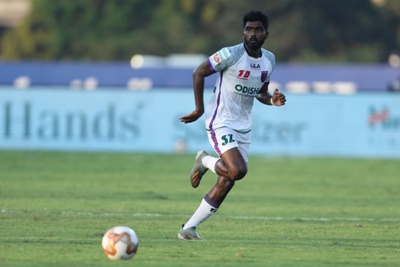 George D'Souza of Odisha FC in action during match 18 of the 7th season of the Hero Indian Super League between Mumbai City FC and Odisha FC held at the GMC Stadium Bambolim, Goa, India on the 6th December 2020 Photo by Arjun Singh / Sportzpics for ISL

George D’Souza started his professional career in 2016 with Goan club Sporting Clube de Goa. Being a native of Goa, this helped thrust George into the limelight as he represented the club in the Goa Professional League churning out a string of impressive performances.

The left-back featured in 20 games for the team and scored four goals and provided three assists in the process. After his impressive performances for Sporting, Odisha FC came calling. He signed for the ISL club ahead of the 2020-21 season.

“As I get ready to start a new journey for Bengaluru United, I want to thank Odisha FC. I am grateful to the club and OFC management for all the support in the previous season and I am looking forward to do well in the upcoming days for Bengaluru United as I want to help them achieve their aim by qualifying for the I-League,” George said.