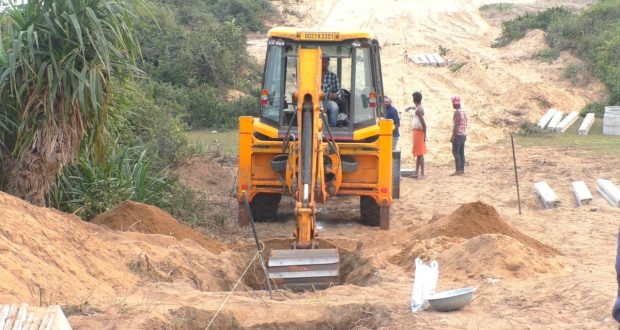 The Odisha Industrial Infrastructure Development Corporation (Idco) has started construction of the boundary wall and temporary roads for the JSW project, which will come at Dhinkia Nuagaon and Gadkujang panchayats in Jagatsinghpur district.

The pre-cast boundary wall and temporary roads are being built for the first ten kilometers starting from the Mahal end of the area at the sea side, at an estimated cost of Rs 7.40 crore. Once the work is completed by Idco, it would be handed over to JSW.

Meanwhile, five teams led by Ersama Tehsildar Chowdhury Pranjananda Das, have been deployed in Patna, Mahal, Gobindpur and Dhinkia villages for betel vines measurement and demolition work. Till Tuesday, 302 betel vines had been measured in four villages in the Dhinkia panchayat, of which 248 were demolished.  A total of 180 betel vine owners have been given financial assistance to the tune of Rs 4.34 crore as compensation.