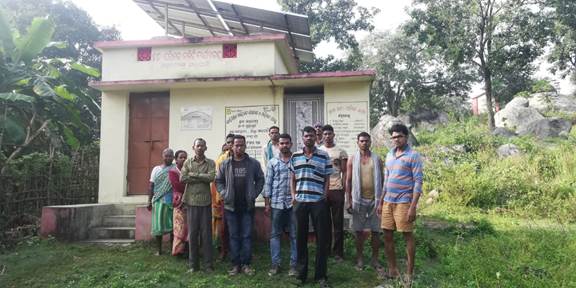 For decades, people of Madhuramba village in Gajapati district of Odisha faced water crisis, which would become acute in summers. Till 2018, the residents of the village struggled daily to meet their drinking water needs. Lack of water in close proximity made life more difficult for them. Four hand pumps in the village catered to the water requirement of all the residents. In summer as ground water level depleted, the situation would turn grim as there would be no water available to draw from the hand pumps and people were forced to walk long distances in search of water.

With the launch of Jal Jeevan Mission in August, 2019, there emerged a ray of hope for the people of Madhuramba village. Gram Vikas, a civil society organization, which was already working in the area, took advantage of the opportunity offered and approached the community with possible solution to end their ordeal. A participatory meeting was organized in the village wherein people were informed about the ’Har Jal Ghar’ programme launched by the Union Government, which aims to reach every rural household with tap water connection by 2024. It was informed that every home in the village could get a tap water connection if they were willing to join the programme, prepare a village action plan with support from the public health engineering department officials, approve the plan in the Gram Sabha and submit the same to the district administration for consideration and implementation.

The community was more than willing to be part of the mission and requested for installing three tap connections in their homes, which would not just provide ’ease of living’ but at same time end drudgery faced especially by women and young girls, who had the primary responsibility of collecting water to meet the family needs. On many occasions, the young girls dropped out of school to support their mother fetch water while the mother was the care giver for not just the elderly members in the family but also the livestock. The request for three tap connection was to provide water in kitchen for drinking and cooking meals, in bathroom for bathing and washing clothes and the third one for usage in toilets.

To ensure that easy availability of tap water does not result in wastage of water by the public, water meters were installed in every household. User fee was charged based on water consumption. Installation of water meter acted as a deterrent, people were told that they will be paying more user charges if the tap was left open with water flowing without use. Judicious use of water was instilled in public mind. The Village Water & Sanitation Committee (VWSC) checked the meter reading as they issued bill to collect user charge.

Since the time tap water connections provided in the village, the VWSC has been smoothly discharging its duties. The user charge collected from the community by the VWSC members is deposited in the State Bank account opened for the sole purpose of operation & maintenance of water supply structure created under the scheme.

The community is working towards making their Panchayat into a ’Jal Prabudh Gaon’, for which they have developed a grey water management plan. Water flowing out of kitchen and bathing area is directed towards the kitchen garden which in turn helps in recharging the ground water level. The village has seen a complete change from what it was a few years ago to what it has managed to achieve which not just provides the villagers with basic needs but at the same time helps address migration, provides them livelihood opportunities by way of employment and time to learn new skills.