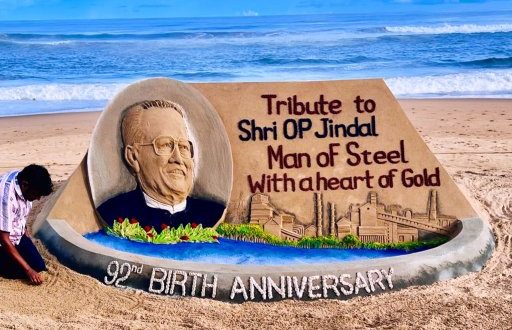 Jindal Steel & Power (JSP) observed the 92nd Birth Anniversary of its founder Om Prakash Jindal (Bauji) with a floral tribute to the legendary industrialist and philanthropist and organising several social welfare activities for the community.

Early in the morning the officials with their family members and people from periphery villages paid floral tributes to the divine soul and expressed their mark of respect for the legendary personality OP Jindal.

In this state-level tournament, 12 teams from different districts of Odisha are participating. The final match of this tournament will be played on the 18th of August.

Besides, as a measure of social service JSPL Foundation provided dry rations to various Senior Citizen Homes in the district.

In the evening a Bhajan Sandhya was also organised by Jindal Mahila Samiti (JMS) at the Devbhoomi Temple in Angul’s Jindal Nagar Township.

Internationally acclaimed sand artist Sudarsan Pattnaik paid a touching tribute to the legendary industrialist with a huge sand art, captioned as “Tribute to Sri OP Jindal, the Man of Steel with a Heart of Gold” at Puri Beach today.

A visionary and humanitarian, OP Jindal has made significant contributions to the economic and social advancement of India. He received the prestigious “Lifetime Achievement Award” from the Bengal Chamber of Commerce & Industry in November 2004 for his remarkable contribution to the Indian Steel Industry. He was the Minister for Power in the Haryana Government after being elected to the Haryana Vidhan Sabha. He was also a member of the 11th Lok Sabha.