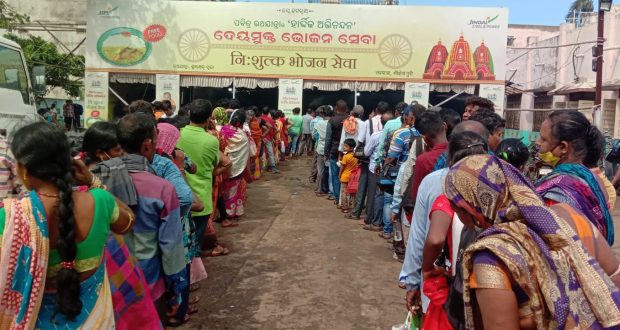 The service by JSPL Foundation, under the guidance of its Chairperson Shallu Jindal commenced on Netrostav Day on June 30 and continued till Suna Besha on July 10. With the support of local volunteers, the Foundation provided over 3.30 lakh hot-cooked pure vegetarian meals which included rice, dalma (medley of lentils and vegetables) and khatta (chutney made from tomatoes, jaggery and dates) in a special stall at Bus Stand, near Gundicha Temple in Puri.

“We are ever obliged for the Divine grace of Lord Jagannath for giving us the opportunity to serve the devotees during the grand festival of Rath Yatra at Puri.  We always believe that ‘Service to Mankind is Service to God’. May Mahaprabhu Jagannath, the Lord of the Universe, bless mankind with good health and peace across the world,” said JSPL Foundation Chairperson Shallu Jindal.

JSPL Foundation also distributed 10,000 packets of glucose among the devotees at the Grand Road on Rath Yatra day; and provided 1,000 raincoats to the district administration for use by various frontline government employees on duty during the festival.