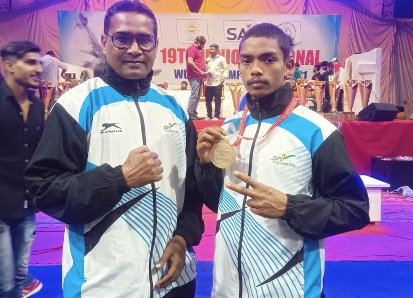 Babulu Munda of Sialijoda village under Deojhar Grampanchayat in Keonjhar district has once again brought laurels for Odisha. Supported by JSPL Foundation, the social arm of Jindal Steel and Power Limited (JSPL), the tribal talent has clinched gold medal in the 19th Junior National Wushu Championship-21 held at Fatehabad, Haryana from 10th to 15th March.

Babulu defeated his Manipur counterpart Laishram Ramesh in the 48-kg category to bag the yellow medal in a high-octane match.

In the tournament, he defeated contenders from Karnataka, Jharkhand, Delhi, Haryana and Manipur on his way to the final. Led by coach Pankaj Mahanta, the five-member team of Babulu Munda, Rajesh Munda, Krishna Khandayat, Sanjeeb Naik and Shibdutta Mahakud had represented Odisha in the tourney.

Congratulating Bablu on his achievement, JSPL Foundation Chairperson Shallu Jindal said, “I am thrilled to know that Babulu Munda of Barbil groomed by JSPL Foundation has won gold medal in Wushu National Championship held at Fatehabad, Haryana. It is notable that JSPL Foundation-supported Sports Talents are exhibiting masterful performance at National level. Babulu and his peer group have won many National and international laurels in the past.”

“I am hopeful that the talents from tribal predominant region, nourished by JSPL Foundation will continue to make the Country proud,” she added.

“The bout was tough and I gave my best,” said an elated Babulu after the game.

Earlier, Babulu had won silver medals in the 7th World Wushu Championship, Brazil and 10th Asian Junior Wushu Championships held in Brunei in 2018 and 2019, respectively. Babulu’s passion for martial arts has earned him 22 medals from 25 events so far at State, National and International levels.

JSPL Foundation, as a part of its mission to promote youth and sports development, has been nurturing the sports talents in tribal predominant geography providing all comprehensive support ranging from infrastructure, coaching, nutrition and other associated facilities.