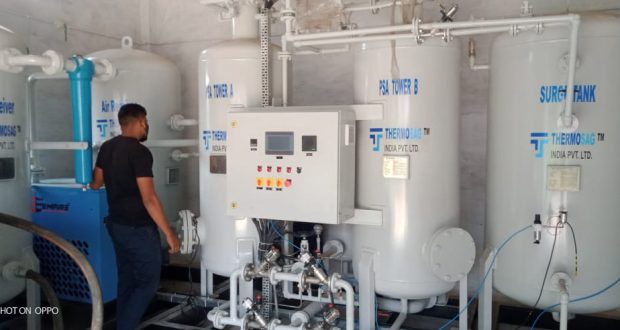 Country’s leading steel makerJSW Steel contributed an advanced oxygen plant and machinery to adequately cover the needs of people at Jagatsinghpur.  The Oxygen Plant has been installed at the District Headquarters Hospital (DHH) amid the third wave of Covid-19 outbreak.

“At JSW we believe in inclusive industrialization and we are consistently taking people along with us” said Ranjan Nayak, COO & spokesperson of JSW.

The company invested over Rs 42 lakh from its Corporate Social Responsibility fund through JSW Foundation to install state of the art advanced machinery. This plant capacity is 400 LPM (liters per minute) of oxygen and it will cater to the12 beds in the Intensive Care Unit in the hospital and other high dependence units from Pediatrics Department.

This is the second Oxygen plant in the facility. Considering high oxygen demand during the outbreak, the Central Government had already established 1,000-liter oxygen plant here at the Jagatsinghpur DHH, which is connected to 56 beds of Medicine department.

Later, the state government and district administration had a consultation with JSW for installing critical care plant for the benefit of highly Oxygen dependent patients in view of the patient load.JSW installed the second plant and The commissioning of the plant is scheduled for end of February after the samples from the unit are tested.

Chakradhar Jena, District Programme Manager (DPM) Jagatsinghpur, National Health Mission informed that the out patient load of the facility on an average is about 700 per day and the existing 190 beds for inpatientcare are filled to the strength. In such a situation, this intervention by JSW to cater paediatric unit is a welcome gesture.

According to the report, many Covid-19 patients had died due to Oxygen shortage during the peak of the second wave of the pandemic. Meanwhile, the two oxygen plants are expected to be beneficial for ​​patient care here as reported.