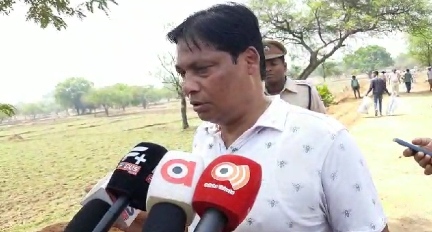 People of Jolodihi village under Kukuda Panchayat and Rengalbahal village of Alanda Panchayat who will be displaced in the land acquisition process for expansion of the Lanjiberna limestone mines of Dalmia Cement (Bharat) Limited [DCBL], appreciated the Rehabilitation & Resettlement (R&R) scheme offered by DCBL, during a public hearing held today. They also came with certain proposals which would be considered giving topmost priority to the interest of the land losers, assured the Sundargarh district administration and DCBL management.

Picture leaflets, booklets and banners in Odia language were distributed among the displaced families.

The land acquisition process for expansion of the Lanjiberna limestone mines of DCBL is going on in a phased manner. Keeping in view the interest of the displaced families of Jolodihi and Rengalbahal during the second phase of the land acquisition process, Sundargarh Sub-Collector and Administrator, Rehabilitation & Resettlement had sent the draft R&R scheme to Kukuda and Alanda panchayats vide Memo No. 402, dated 17.05.2022. This scheme abides by Odisha R&R Policy 2006, RFCTLARR Act-2013 and also the standard R&R scheme followed for all displacement in Sundargarh district till date.