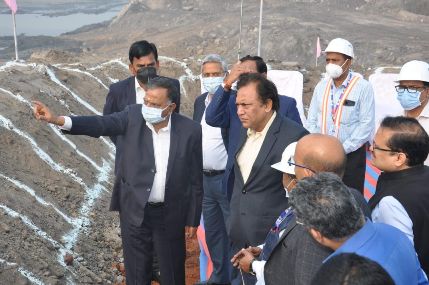 Union Coal Secretary Anil Kumar Jain appreciated Mahanadi Coalfields Limited (MCL) for playing a pivotal role in helping the nation successfully control and recover from the crisis situation that had occurred due to shortage of fuel at power plants.

Jain, who was here on a two-day official visit to MCL, reviewed the performance of the company and appreciated its role in timely scaling up coal supplies to the power plants and helping in averting the crisis situation for power in the country that aggravated in the beginning of the third quarter of the current financial year.

The Secretary, who was accompanied by M Nagaraju, Additional Secretary in the Ministry of Coal, and Binay Dayal, Director (Technical), Coal India Limited, inspected coal mining and dispatch operations in Talcher coalfields and chaired a review meeting with the functional Directors and senior officers of MCL, which contributes a quarter to the total dry fuel production by Coal India.

PK Sinha, Chairman and Managing Director, MCL/Northern Coalfields Limited, briefed the Secretary about performance and future plans of the company for the current financial year.

The Secretary also interacted with the coal miners and heads of local formations during his visit.