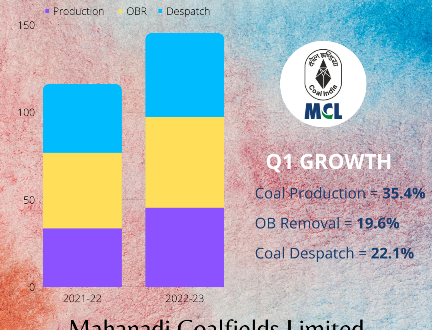 Mahanadi Coalfields Limited (MCL) has ended Q1 of financial year 2022-23 on a high note, posting a massive growth of 35.4% in coal production along with double digit growth in coal dispatch and overburden removal (OBR) as against same period previous year.

The leading coal producing subsidiary of Coal India Limited, under Ministry of Coal, Government of India, achieved the highest ever coal production of 45.36 million tonne (MT) in April-June Quarter(Q1) of FY ’23. MCL produced 15.49 MT coal in June 2022, the highest ever in the month of June.

“The growth attained by MCL is a result of excellent teamwork and coordination among different teams at all levels in the company,” said OP Singh, Chairman-cum-Managing Director, while congratulating his teams, reserving special appreciation for the teams in coalfields for exceeding expectations.

Singh also expressed his gratitude to people’s representatives, state administration, representatives of trade unions, peripheral villagers and all stakeholders for their continuous support to the company.

Coal dispatch of 48.01 MT to consumers in Q1 of current fiscal was also the highest ever in the history of the company, registering growth of 22.1% over the same period during FY’22. MCL had dispatched 16.26 MT coal to consumers in the month of June 2022.