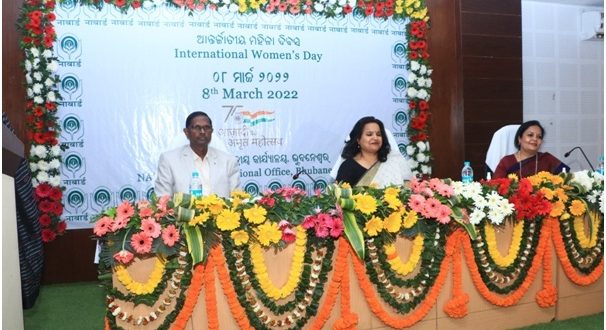 The Odisha Regional Office of NABARD on Tuesday celebrated the International Women’s Day. The event was organised at Bhubaneswar and in 15 districts of Odisha.

The programme at Bhubaneswar was graced by Anu Garg, Additional Chief Secretary, Department of Water Resources, Government of Odisha as Chief Guest and Poly Pattnaik, Principal, Mothers’ Public School as Guest of Honour.

During the event, twelve women micro-entrepreneurs from 10 districts viz. Balangir, Bhadrak, Deogarh, Gajapati, Jajpur, Khorda, Koraput, Mayurbhanj, Sambalpur and Subarnapur who transformed themselves into ‘Change Agents’ and contributed for the overall development of the Society were felicitated.

Besides, ten women CEOs of Civil Society Organisation associated with NABARD, Odisha were felicitated on the occasion.

Garg congratulated the change agents for their contributions to the society and encouraged the participants to be role models in the society. She shared her experience as the Head of Women and Child Welfare Department in the State and lauded the role of SHGs in various developmental aspects of the Government. She indicated that various steps are being taken by the state government for empowerment of women. She further said that the Government of Odisha has been making untiring efforts in building required infrastructure , capacity building and linkages. An encouraging exponent of women across the section, she appreciated the role of NABARD in supplementing the efforts of State Government in infrastructure development in rural areas and empowering the SHGs through its various promotional activities. Further, she stressed upon the need for up-scaling these small achievements and development of these into large clusters, and development of market linkage. She also appreciated the hard work and commitment of these micro entrepreneurs.

In her address, Poly Pattnaik spoke about gender inequality/disparity and importance of education for the girl child.  She also highlighted that the society at large should always be concerned and sensitive towards the needs, requirements of women and one should come forward to support the overall development of women.

The Change Agents, the micro-entrepreneurs shared their experiences and were praiseworthy about the support they had received from NABARD.