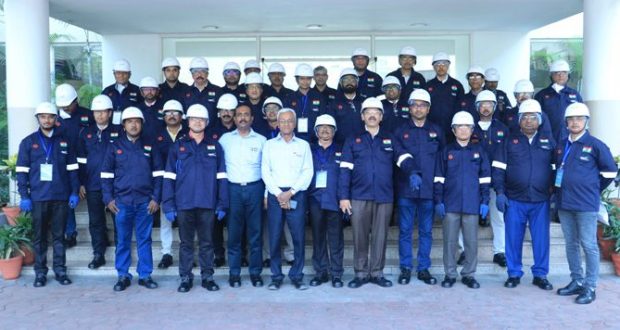 More than 60 delegates of the National Mineral Congress, organised by the Indian National Committee World Mining Congress and supported by the Union Coal Ministry, visited the Coal Gasification Plant (CGP) set up by Jindal Steel & Power (JSP) at Angul, on the second day of the Mining Congress on  Saturday.

The visiting team, comprised of senior mining professionals from various metal, mining & mining technology organisations across India, had an overview of all the units of the CGP to have first-hand knowledge about its functioning and advantages.

JSP Managing Director VR Sharma and other senior officials explained to the visiting delegates various features of the CGP, and the process for the production of the synthesis gas. JSP is the first steelmaker in the world to produce steel through the CGP – DRI route.

JSP commissioned the Coal Gasification Plant of 225,000 Normal Meter Cubed per Hour capacity in 2014, which is a milestone for global steel the company.

The CGP uses high ash coal which is predominantly available in the vicinity of the Project site. The Coal-Gasification Plant set up by Jindal Steel & Power at Angul has become a ‘Technology Demonstrator’ and is frequently visited by national and international dignitaries and organizations. Students from Harvard University and MIT visited the CGP and wrote out an in-depth case study on it.

The JSP chief highlighted the benefits of coal gas technology for producing clean energy. “Coal Gasification uses the chemical energy of coal and offers the cleanest and most efficient means to produce sponge steel and chemicals like methanol, ethanol, and blue hydrogen,” said Jindal.

Jindal thanked the Prime Minister and the Ministry of Coal for encouraging Coal Gasification technology. “We are committed to take care of the environment and simultaneously ensure economic development for becoming the ‘Atma Nirbhar Bharat’ through the application of green technologies like coal gasification. The industry needs to collaborate with each other and work together to make this technology more efficient,” he added.

Participating in this session JSP MD VR Sharma also highlighted various advantages of coal gas technology. “The synthesis gas produced from the CGP contains 60 percent hydrogen. We can make the cheapest blue hydrogen from this. The Government needs to ensure the availability of coal to the CGP from a single coal mine; so that it can get coal of consistent quality and achieve better efficiency,” Sharma said.

Sharma suggested that more Coal Gasification plants need to be promoted in and around coal-bearing areas so that the logistics expenses are minimized.

He suggested that India should install Integrated Gasification Combined Cycle (IGCC) power plants based on Syn Gas or Coal gas which will help the government in reducing coal transportation. “Instead of coal transportation, we should transport power through transmission lines,” Sharma added.