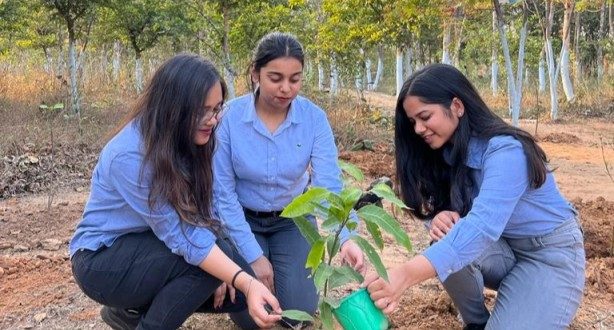 Vedanta Aluminium, India’s largest producer of aluminium, launches the FY23 edition of its GreenHearts campaign during which it will plant more than 2 lakh saplings across its operations in Odisha and Chhattisgarh.

Launched last year, GreenHearts is an annual bio-investment campaign, whereby the company’s business units undertake mass plantation drives during monsoon, for increasing the green cover in and around its plant operations. Through GreenHearts, the company aims to galvanize employees, business partners, families, and communities to be collaborative participants in Vedanta Aluminium’s climate action roadmap to achieve Net Zero Carbon operations by 2050.

Speaking about Vedanta Aluminium’s approach to climate action, Vedanta Aluminium CEO Rahul Sharma said, “Being India’s largest producer of aluminium, we see our role as that of a climate action steward, leading the way for the entire aluminium industry towards net zero operations. We are striving to nurture a culture wherein every member of the Vedanta Aluminium family is a climate champion. The #GreenHearts campaign is our initiative to encourage our employees, partners and stakeholders for collective and participative action towards bio-investment.”

“Besides creating carbon sinks and greenifying our local ecosystems, these plantation drives also add to our endeavours of biodiversity conservation in the regions where we operate,” he added.

Vedanta Aluminium has deployed a multi-pronged climate action strategy which includes operating plants at high levels of operational efficiencies, increasing quantum of renewables in its energy mix, transitioning to cleaner fuels from fossil fuels, and bio-investment programs. Parallelly, the company is investing in cutting-edge digital and technology solutions to make its assets climate-resilient and mitigate the impact of climate change on the business.

Vedanta has launched low carbon ‘green’ aluminium under the brand name ‘Restora’ whose carbon footprint is nearly half of the global threshold of 4 tonnes of CO2 equivalent per tonne of aluminium for low carbon aluminium.

The aluminium major has planted nearly 60 lakh saplings across its operations till date which have transformed into large carbon sinks.

Vedanta Aluminium is India’s largest consumer of renewable energy, at 3 billion units in FY22. Operational efficiency and energy conservation initiatives have resulted in energy savings of more than 21 lakh Giga Joules in FY22.

Beyond operations, Vedanta Aluminium is working with local communities to make their lives and livelihoods resilient in the face of changing climate. The company has been helping farming communities adopt climate-smart agriculture to boost irrigation potential and reduce dependence on monsoons for cropping. It’s also imparting training to them on growing climate-resilient crops for improving yield despite irregular climactic conditions. The company is also building and rejuvenating hundreds of community water infrastructures like ponds and percolation tanks to help communities get perennial access to water.