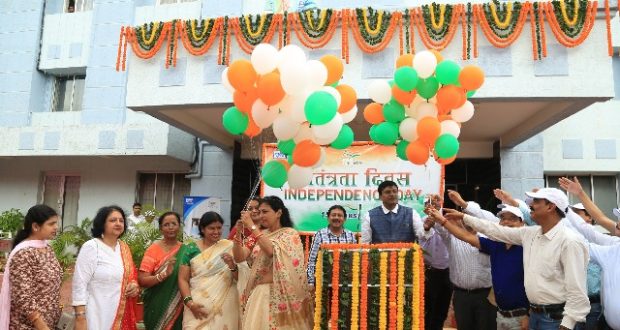 The 76th Independence Day was celebrated at NTPC ER-II Headquarters with patriotic fervor.

Addressing the audience on the occasion, Goswami said, “The people at NTPC were the prime movers of powering our nation and contributing significantly to its growth. With a humble start in 1975, NTPC is now the nation’s largest and most admired energy major. It is indeed a matter of pride that our company is India’s largest integrated energy company with an installed capacity of more than 69 GW powering the country’s growth.”

The Regional Executive Director further stated that NTPC is expanding its footprint in new business areas like green hydrogen, waste-to-energy, and e-mobility. India’s largest powerproducer is also aiming for a 10 per cent reduction in net energy intensity by 2032. NTPC has become India’s first energy company to declare its energy compact goals as part of the UN High-level Dialogue on Energy (HLDE).

NTPC has been recognized as one of the “Most Preferred Workplaces of 2022” by renowned Team Marksmen in association with India Today.

NTPC’s flagship CSR initiative, Girl Empowerment Mission (GEM), had reached new height of success in helping young girls realize their goals. This year, NTPC has carried out its GEM program in around 35 projects/stations. ER-II Region has stood as a pillar and partner in NTPC’s journey towards excellence.

Goswami called upon everyone to work together towards the larger cause of sustaining the competitive advantage of the company and the development of the nation. He urged upon all employees of ER-II to come forward and contribute their best for the organisation and the Nation at large.