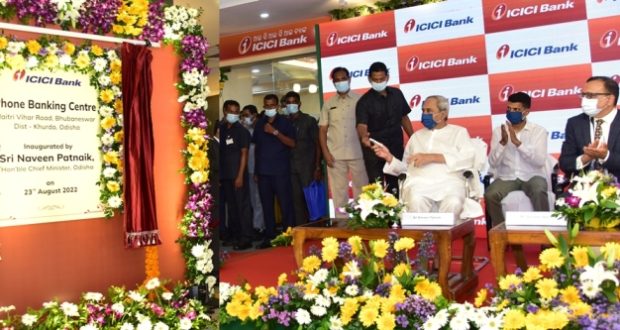 Odisha Chief Minister Naveen Patnaik on Tuesday inaugurated the ICICI Bank’s state-of-the-art phone banking centre in the State Capital. Powered by Artificial Intelligence (AI) and robotics, the centre is well equipped to serve the Bank’s retail, business and corporate customers across the country. It also facilitates customers in account opening through Video KYC.

The centre will provide direct employment to 1,200 individuals, most of them are from the state and 60 per cent of workforce is women.

Inaugurating the centre in presence of ICICI Bank Executive Director Sandeep Batra, Patnaik said: “I am pleased to inaugurate the bank’s modern phone banking centre in Bhubaneswar which is enabled with latest technology of artificial intelligence and robotics.”

“ICICI Bank has been serving customers in Odisha through its wide network of branches and ATMs, internet banking and mobile app. It is also a large employer in the state. In addition to banking, ICICI Bank is engaged in activities related to social sustainability and inclusion in the state through its CSR initiatives,” the Chief Minister added.

Stating that digitisation has been playing a key role in transforming Odisha, ICICI Bank ED Sandeep Batra said it is the first among Indian states to provide many digital services in the fields of education, telecom, land record and disaster management, among others.

“The state has made hundreds of services online, offering unparalleled convenience to its citizens and enabling their progress and growth. At ICICI Bank, we do have the same philosophy of leveraging technology to provide enhanced convenience to our customers. This has led to the Bank becoming a trustworthy brand in the state, which has resulted in a robust growth in our total assets and deposits,” said Batra while thanking the people of Odisha for reposing trust in ICICI Bank.

The ICICI Bank has a wide network of 168 branches and 271 ATMs, call centre, internet banking and mobile application in Odisha. The Bank offers a comprehensive range of accounts including savings and current accounts, deposits such as fixed deposits and recurring deposits, and loans– home loans, personal loans, auto loans, gold loans, business loans and overdrafts– and credit cards.

The Bank has witnessed a steady growth in the state over the years and has reported a rise in retail loan disbursement by 25 per cent to over Rs. 5,200 crore in FY22 year-on-year.

In order to empower the rural population of the state, ICICI Bank is supporting the entrepreneurial spirit of rural women of Odisha with its Self Help Group (SHG) programme. The Bank has provided loans to over 4,500 SHGs benefitting more than 50,000 women.

Beyond business, the Bank is actively involved in supporting rural communities through initiatives undertaken by ICICI Foundation for Inclusive Growth, the CSR arm of ICICI Group. ICICI Foundation has provided sustainable livelihood to over 6,000 under privileged people in rural areas. It has also imparted free-of-cost vocational training to over 3,000 underprivileged youth of Odisha and helped them get jobs or set up their own ventures.