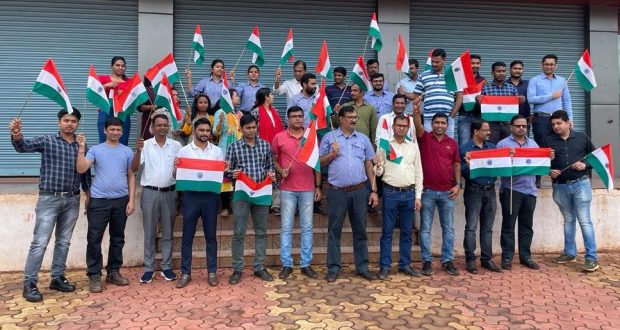 As part of the ‘Azadi Ka Amrit Mahotsav’ or the 75th Anniversary of Indian Independence, the Odisha Mines division of JSW Steel commenced the ‘Har Ghar Tiranga’ campaign at its Bhadrasahi and Jajang offices on Saturday.

The ‘Har Ghar Tiranga’ was also celebrated at the company’s Bhubaneswar office. Earlier, the same was kicked off in Paradip office to mark the Azadi Ka Amrit Mahotsav.

Senior officials handed over the national flags to the local staff and employees to mark the drive.

Last month, Prime Minister Narendra Modi had urged citizens to hoist national flags at their homes and also change their social media display pictures to embrace the spirit of Independence Day celebrations. As a part of the celebration, the campaign is to be celebrated from  August 13 to 15.