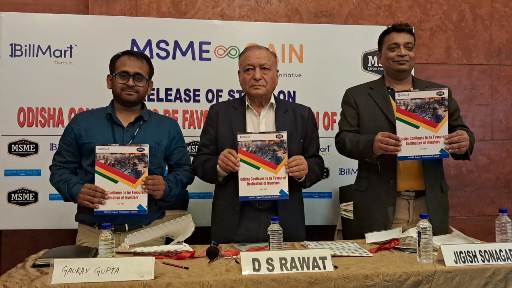 Notwithstanding the adverse effects of Covid-19 pandemic, Odisha continues to lead in attracting new investment projects and in just four years between 2018-19 and 2021-22 it has cornered new proposals worth Rs 4 lakh crore, as per a study undertaken jointly by MSME Export Promotion Council and knowledge firm BillMart FinTech.

The study, which was jointly released here today by MSME EPC Chairman DS Rawat and BillMart Founder & CEO Jigish Sonagara, also revealed that Odisha recorded a significant increase in the under implementation rate, which means the projects that were announced progressed to the implementation stage.

There was a significant improvement in terms of count of projects and bulk of the new investments were made in the steel manufacturing industry, as the steel industry  has been thriving with an increase in export demand and firm global prices.

During these four years, the investment projects of worth Rs. 1,25,089.53 crore were completed and projects worth of Rs.1,12,453.42 crore pending for implementation were revived, thus generating a large number of new direct and indirect employment.

The State government should give further push to ‘completion of projects’ to avoid the cost escalation and constitute a high powered committee under the chairmanship of the Chief Secretary of the State to examine each case and accord clearances within a stipulated time frame, suggested Rawat.

Odisha for the last one decade has economically grown at an average rate of over 7 per cent and witnessed a faster growth rate as compared to national average of around 6.5 per cent. The per capita income of Odisha increased by 115.60 per cent higher than the per capita income growth of India at 111.51 per cent from Rs.63,462 to Rs.1,34,226 between 2012-13 and 2019-20, the study revealed.

On the exports front, Odisha has been acknowledged and categorized by the NITI Aayog as an over-performing state. In categories such as export ecosystem, Odisha secured second rank next to Maharashtra with the central agency praising the trade support initiative of the government.

Referring to the MSME sector, Sonagara said, at present Odisha is having 4.5 lakh registered MSMEs providing over 17 lakh jobs. Endowed with rich mineral resources, Odisha has emerged as a choice for investors. Therefore, the big-ticket investments and over 275 medium and large existing units need to develop a strong ecosystem for MSMEs to grow.

Unfortunately, one of the biggest pain points of MSMEs today is gaining access to affordable credit, and therefore BillMart has developed a digital ecosystem to handhold the MSMEs and provide seamless experience in raising short term working capital, unlocking trade receivables, freeing cash flows, he added.

He further said the MSME Export Promotion Council and BillMart FinTech have joined hands to empower the businesses to decide the most suitable and customized financial solutions for their businesses.