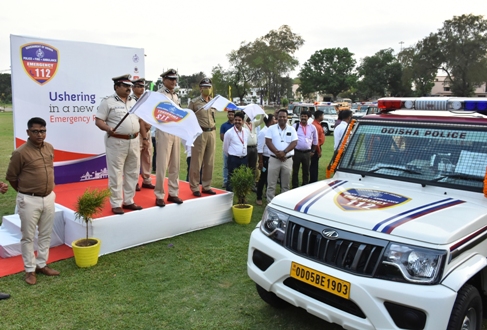 In an endeavor to improve the emergency service infrastructure in the State, the Odisha Government along with Odisha Police has deployed 106 numbers of 112 Emergency Response Vehicles (ERVs) in the first phase across the State. The aim of this new service is to address the distress calls by the citizens in a more coordinated manner.

These new 112 ERVs will act in similar lines to that of a PCR van. But to manage the tasks more efficiently, these new vans have been equipped with modern systems such as GIS and GPS. With these additions, assistance will be provided promptly and effectively at the time of emergency situations such as crime, mob acts or accidents.

Speaking on the occasion, Chhabra said, “Like 911 number in America, people of Odisha will get three emergency services like Police, Fire and Ambulance under one emergency number i.e. 112. In the second phase, we are going to launch another 150 vehicles.”

“The Odisha Government has launched an all-encompassing emergency helpline number ‘112’ to bring police, fire brigade, ambulance and other services under the Emergency Response Support System (ERSS). The launch of these new 106 ERVs are in line with the state government’s effort in strengthening the 112 service. This initiative will be a key enabler to ensure timely response in case of any emergency and a boost to the 4.3 crore population of the state,” said Sabyasachi Biswal, State Head, Ziqitza Healthcare Limited, the managing company for 112 ERVs in Odisha.

Ziqitza Healthcare Ltd, has been awarded to manage and operate these emergency response vehicles. Like other emergency services, this will be entirely free for all the people of the state. Presently, government provides various emergency services e.g. Police, Fire, Health etc. to citizens through different channels. The existence of multiple emergency numbers creates confusion in the minds of the public. Through the new 112 emergency response service a common integrated platform will bring, Police, Fire, Ambulance and other services together. This will simplify the process and will reduce the response time for the public.