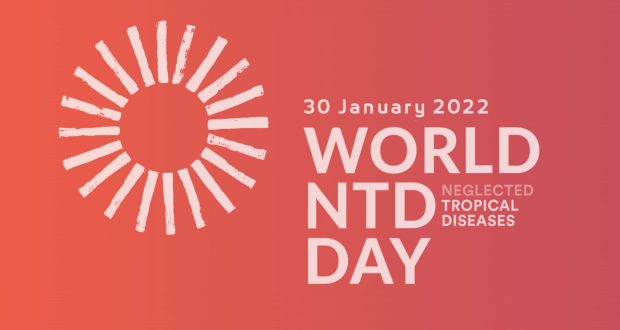 In a message on the eve of World NTD Day, Dr. Mishra said, “We are pleased to see World NTD Day providing a platform for raising awareness through the new ‘100% Committed’ campaign led by Uniting to Combat NTDs and efforts such as the light-up activation. We hope that this movement continues to gain traction and spark new partnerships and commitments necessary to beat NTDs for good and for all.”

One hundred landmarks in 34 countries will be lighted up in unity to mark the third annual World NTD Day on January 30, 2022.

Dr. Mishra said that NTDs are a group of communicable diseases that are preventable and treatable, yet continue to affect more than 1.7 billion people worldwide, including 1 billion children.

“NTDs cause immeasurable suffering – they debilitate, disfigure and can be fatal. By most commonly affecting some of the most vulnerable people in the world – who often live in remote communities – NTDs create cycles of poverty and cost developing nations billions of dollars every year,” Dr. Mishra added.

He further said that research shows that women and girls are disproportionately impacted by NTDs, which affect remote, impoverished communities where they may experience more difficulty accessing health care than men. Their daily routines often consist of high-risk activities – such as washing clothes in rivers – that also make them more susceptible.

Additionally, when NTDs affect someone in a family, the additional care giving burden typically falls on women and girls, who are often forced to sacrifice their work or education to provide care.

World NTD Day, observed on January 30, is a global movement that aims to galvanize the global health community and engage the public in the urgent effort to end NTDs.

This year, Uniting to Combat NTDs used World NTD Day to launch the “100% Committed” movement, which exists to begin securing political and financial commitments in support of the Kigali Declaration on NTDs.

The Kigali Declaration, a high-level political declaration, provides the opportunity to mobilise the political will, community commitment, resources and action needed to end unnecessary suffering from NTDs.