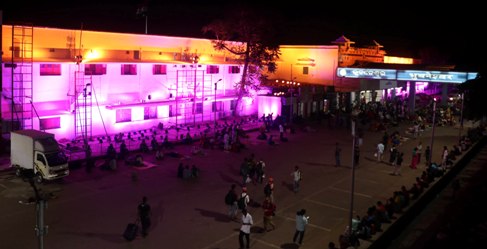 World Malaria Day is observed on April 25 every year to bring global attention to efforts to end malaria, encourage action to reduce suffering and death from the disease, and highlight the need for continued investment and sustained political commitment for malaria prevention and control. This year, in Odisha, the Bhubaneswar Railway Station was lit up as a sign of the state’s commitment to ending malaria and to raise awareness about how we can safeguard ourselves from falling ill.

By sharing key messaging at busy station platforms, the National Centre for Vector Borne Disease Control (NCVBDC) aimed to share important information about ways to prevent, treat and eliminate malaria. Loudspeakers on the platform and messages projects on the station walls underscored key messages about steps the public could, such as keeping surroundings clean and free from accumulated water, using mosquito nets and sprays, and getting blood tests and full treatment in case of fever.

Odisha has traditionally had a high burden of malaria, but in the period between 2016 and 2021 cases have reduced by 94%. Thanks to innovative solutions such as Long Lasting Insecticidal Nets (LLINs), government in endemic regions have been able to propel the country toward its goal of malaria elimination. Between 2019 and 2020, India reduced malaria cases in the country by nearly 50%, taking a significant leap towards eliminating the vector-borne disease in time to meet global targets.

“Vector control poses a challenge to malaria elimination. Innovation in vector control, including wider use of LLIN and innovation in new medicines and vaccine, is the need of the hour. Apart from that, innovation in environmental engineering and rural housing along with inter sectoral collaboration well be a lot of help in malaria elimination,” Dr. Shubhashisha Mohanty, Joint Director of Health Services, National Vector Borne Disease Control Programme (NVBDCP) said.

Endemic states, such as Odisha, with fragile health infrastructure and accessibility challenges, particularly in a post COVID-19 recovery period, still bear the heaviest burden of malaria in the country. By raising public awareness about the importance of protecting ourselves from malaria and outlining the key steps to prevent illness and death from malaria, the Ministry of Health and Family Welfare hopes to build momentum in the drive to end malaria in India by 2030.