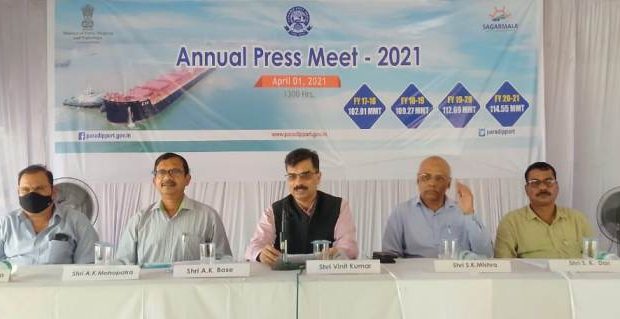 The Paradip Port Trust (PPT) has created an all-time history for the Port by handling a record 114.55 million metric tonnes (MMT) of cargo in the Financial Year 2020-21. With this, PPT achieved the coveted 100 MMT of cargo handling for the fourth consecutive year.

Sharing this information with media during its annual press meet here on Thursday, PPT Chairman Vinit Kumar said that notwithstanding the impact of Cyclone Amphan and COVID-19 pandemic, Paradip Port has once again repeated the feat by crossing the 100 MMT mark in succession. The Port has accomplished this feat even as two of its existing berths are not available for handling of cargo, since these are under mechanization process, he added.

Kumar further said that PPT achieved all-time traffic throughput of 114.55 MMT during FY21 as against 112.68 MMT recorded in the previous fiscal, thus registering a growth of 1.65 percent.

This is also the highest OSBD (Output per Ship Berth Day) in bulk cargo i.e. the most efficient, having lowest marine charges and the largest Railway Terminal in the country in terms of rakes handled, said Kumar.

Speaking about the port performance parameter viz. berth-day output during the year, Kumar said, it improved to 23,943 MT while pre-berthing detention improved from 15.32 hours in FY2019-20 to 6.20 hours in FY 2020-21; and the berth occupancy at 74 percent as against 73 percent in the previous year.

PPT’s profit before tax increased 6.02 percent to Rs.722 crore during FY21 as against Rs 681 crore in the previous fiscal.

In March this year, the Port handled the highest ever monthly traffic of 11.64 MMT, as against the previous record of 11.17 MMT registered in January 2021, said Kumar.

The port also handled the highest ever Average Rakes per day i.e. 51.82 numbers in February’ 2021 wherein, the average of incoming and outgoing rakes were 29.93 and 21.89 respectively, he informed.

Speaking about the Port’s modernization plan, the PPT Chairman said that over Rs.2000 crore worth of projects for port modernization are under implementation. These included mechanization of three existing EQ berths to 30 MMTPA capacity for handling thermal coal exports at an approximate cost of Rs.1440 crore; and development of a new coal import berth of 10 MMTPA capacity at an approximate cost of Rs.650 crore. This apart, development of Western Dock of capacity 25 MMTPA at a cost of Rs.3005 crore has been recently approved by the Union Ministry of Shipping and the project is now in tendering stage, the Chairman shared while adding that on completion, it will transform the Port with facilities to handle Cape size vessels.

The Haridaspur-Paradip railway line has recently been completed. This is a major game changer and makes Paradip Port very competitive in international trading, Kumar pointed out.

The PPT Chairman also spoke about the CSR initiatives taken up by the Port for the welfare of the local communities and development of the peripheral areas.