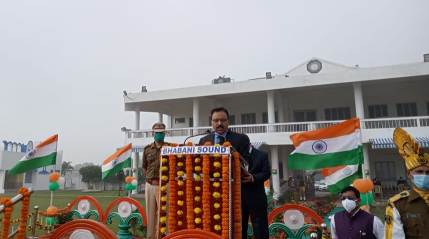 The 73rd Republic Day of India was celebrated by Paradip Port Trust (PPT) in a restrained manner following the COVID-19 guidelines.

Unfurling the tricolour PPT Chairman PL Haranadh said that PPT is determined to cross 115 MMT of cargo handling this fiscal like the last four years. Mentioning about few path braking decisions by the Union Government like Major Port Authorities Act notified on 3rd November 2021, he hoped that this would be a game-changer to the Port sector and take the sector to world class benchmark. “It will provide greater autonomy in decision making to the Major Ports and professionalize their governance,” he said.

The Haridaspur-Paradip Railway line which has recently been completed, is a major game changer and makes Paradip Port very competitive in international trading. Similarly, the 8-laning of the Paradip-Barbil Road by NHAI will further improve the Road connectivity to the Port, he added.

For staff welfare, insurance coverage has been provided to over 900 employees and 800 contract workers giving coverage of Rs.5 lakh for natural death. Constructions of 147 residential quarters have been planned for accommodation of Port employees and other quarters will be also converted in phases.

For fishermen community, the Port has undertaken lighting of Fishery Harbour road and dredging of the navigational channel from Mahanadi River mouth. PPT plans to undertake the modernization and upgradation of fishing harbor at an investment of Rs. 100 crore under the PM Mastya Sampad Yojana.