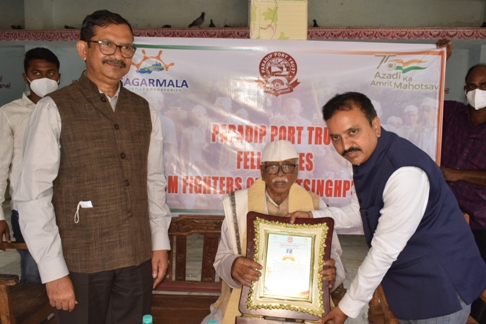 Republic Day celebrations began on January 23 this year to include Netaji Subhas Chandra Bose’s birth anniversary, in line with the Union Government’s aim to highlight important aspects of the history and culture of India.

As part of the ‘Azadi Ka Amrit Mahotsav’ programme, the PPT Chairman visited the homes of local freedom fighters — Madhabananda Manohari of Nuapara village, Bhagirathi Swain of Ichhapur village and Jogendra Maharana of Aanlla village — in Jagatsinghpur district and felicitated them. During the course of interaction, the freedom fighters described how they in their adolescent time participated in the freedom struggle and contributed to the nation-building exercise, in the post-independence era.

Haranadh wished them healthy life and urged the younger generation to be inspired by these living patriots.

Among others, PPT Deputy Chairman AK Bose and Secretary PN Bahekar were present on the occasion.