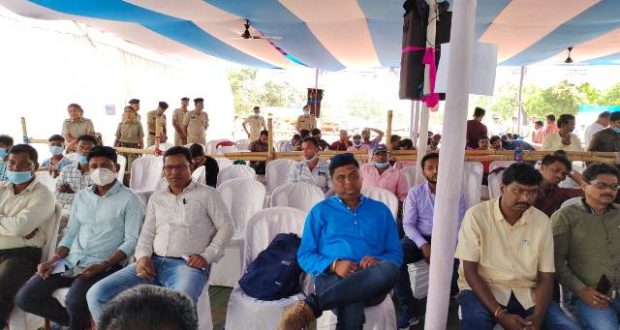 Residents of Harischandrapur, Koira, Kashira and Kusumdihi villages under Koira Tehsil on Tuesday unanimously extended their support to JSW Steel during the public hearing conducted to further environment clearance for the capacity expansion of Narayanposhi iron and manganese ore mines.

The company will also set up a central processing unit (CPU) of 2000 TPH, 6 MTPA of grinding and beneficiation plant for mineral processing and slurry pumping station.

The new set up will transport iron ore concentrate in mine lease area of 347.008 ha (as per DGPS) /349.254 ha (as per ROR) in Harischandrapur, Koira, Kashira, Kusumdihi and Kathamala RF villages under Koira Tehsil of Sundergarh District.

The public hearing was organized by the State Pollution Control Board (SPCB), Rourkela and Sundergarh District Administration. Nearly 2000 villagers attended the public hearing and over 50 persons voiced their opinion in the presence of Odisha government officials.

Addressing the local concerns, Padhi said, “We have noted all the demands and we will attempt to resolve them in a phased manner. Notably, the company has always been focusing on peripheral development. The JSW Foundation is actively engaged in executing the development plans. The foundation has already installed solar street lights and organized health camps to address health-related issues and it will continue to do that.”

Padhi also stated that the project would create direct and indirect employment opportunities for around 1000 local people.