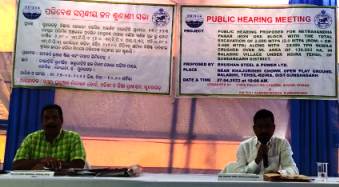 The public hearing was conducted as part of the statutory compliance for environmental clearance. Residents from periphery villages — Khajuridihi, Sonua, Boldihi and Patamunda of Netrabandha Iron Ore Mines participated in the hearing in large number.

Over 500 villagers from periphery areas gathered at the event while 50 residents expressed their opinion in favour of the project.

It was clearly communicated that there would be no displacement under this mining activity and the company would implement modern technology and adopt sustainable mining practices with effective environment management.

The Netrabandha Pahar block located in Sundargarh’s Koira sector has geological reserves of 77.25 million tonnes of which 61.9 million tonnes are high grade deposits.

The company is actively involved in periphery development in these villages even before its mining operation. An official said that company has renovated Anganbadis and provided learning equipment. The company has also installed around 30 solar street lights for the benefit of the villagers. It was also said that around 200 street lights are under installation process. The company is also addressing drinking water crisis by installing bore-well.

In addition, setting up of a dispensary is also in the pipeline to address health related issues of villagers. An ambulance will also be provided to cut the waiting time during health emergencies. Moreover, village level coordinators are recruited to provide persistent service at village level.